Chew on This: Park your appetite at this deli 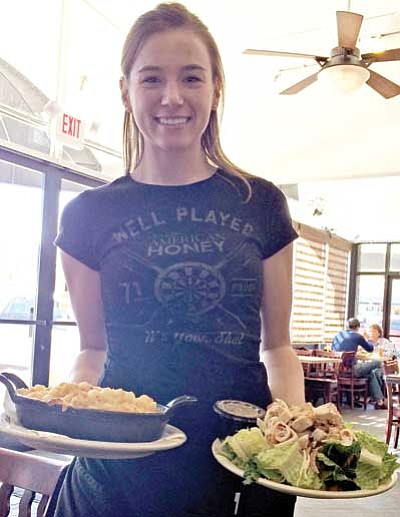 Plain can be good, very good.

The Park Plaza Liquor and Deli is nothing fancy. It's a seat yourself place, with 10 tables arranged somewhat haphazardly in the front of the liquor store.

What it lacks in atmosphere it more than makes up for in taste, locals will tell you.

Pretty close to perfection, say the Internet reviewers: The Park Plaza has received an average 4.5 stars - out of 5 - on Yelp.com (54 reviews), Urbanspoon.com (35 reviews) and Tripadvisor.com (46 reviews).

"The pizza is outstanding. Made from scratch artisan pies."

"A must in Prescott."

"The food is always perfect and beer is even better."

On a recent weekday at lunchtime, The Park Plaza was packed with people nibbling on French Dips (Angus top round, topped with Swiss cheese on a toasted sub served with hot au jus), hot pastrami on rye (with Swiss cheese and mustard on rye), tuna melts ... Most of the sandwiches are $9.99, which includes coleslaw, potato salad, mixed greens, Caesar salad, shoestring fries.

For the "Man v. Food" crowd, try the Ron Swanson Challenge: A dare to eat eight fat cheeseburgers and a basket of fries in 30 minutes. If you down it all, you ate for free; fail, you pay $30.99.

Then there are the pizzas - hand-tossed dough topped with house-made mozzarella, baked up in a wood-fired oven. There is a "meat lover's" (pepperoni, two kinds of Italian sausage, bacon, salami and ham), Park Plaza Pie (Alfredo sauce, "lots of thick bacon," baked ham and red onion), "the stikin' rose" (heavy garlic, red onions and pepperoni). Small pies are in the $11.99-13.99 range, larges from $16.99 to 18.99.

The Plaza is also known for its wood-fired macaroni and cheese ($9.99 for cavatappi pasta with house-made cheese sauce, topped with parmesan garlic bread crumbs and served in a cast iron dish; add back, green chili or goat cheese for an extra $2, chicken for $3). This is a filling, gooey, delightful starch-feast.

And to wash the burgers, pizzas and other treats down the hatch?

Chew on This: Final Score - Burgers 7, Hunger 0
Chew on This: A taste of Italy in Skull Valley
Chew on This: Pinky's American Diner
Foodie Review: Once you've tried The Hungry Monk, you'll join the order
Senior Menus for the week of Monday, Jan. 23, to Friday, Jan. 27
Event Calendar