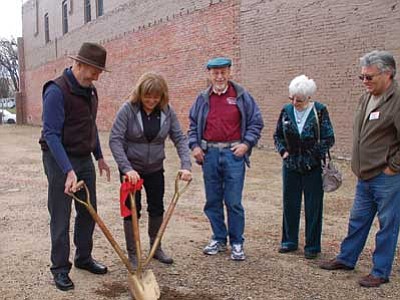 PRESCOTT - No sooner had the lot been cleared of the groundbreaking ceremony Monday morning than the real breaking of ground began on the site of the May 2012 Whiskey Row fire.

"We're starting today," said Jodi Savage of Savage Development, as the backhoe that was standing by came to life.

Owners Howard and Nancy Hinson say the new venture, the Holiday Courtyard, should be complete by May.

Over the next several months, general contractor Savage Development and 10 to 12 local sub-contractors will be putting in the performance stage, patio, restrooms, walkway, and landscaping that will be a part of the finished product.

In her remarks before the groundbreaking, Nancy Hinson said a grand-opening is tentatively planned to occur before the Memorial Day weekend.

That would put the completion approximately in line with the third anniversary of the fire that raged on Whiskey Row on May 8, 2012, destroying three businesses - the Bird Cage Saloon (since relocated on Whiskey Row), Pearl's Place Café, and the Prescott Food Store - and causing significant smoke damage to the next-door building that housed the Jenny Longhorn store and the upper-level Highland Hotel.

A restoration of the Jenny Longhorn space was complete in late 2012, and the restored and renovated Grand Highland Hotel opened in spring 2013.

Meanwhile, the Hinsons also were working on plans for the burned-out lot.

Although the original plans included a replacement building, the Hinsons later scaled back to a gated outdoor courtyard that would be available for a variety of events, such as weddings, reunions, and music and dance performances.

Bill Otwell, architect for the project, said the courtyard would serve to fill in the gap that the fire left behind. "I think it's going to be truly unique to have this space here," Otwell said, adding that the outdoor space would complement the activities on the plaza.

In addition, he said the project would accomplish the long-discussed goal of having a link between the city's downtown parking garage and Whiskey Row.

The Holiday Courtyard will include a paver walkway that will route pedestrians from the back parking-garage stairwell, across the Whiskey Row alley, through the courtyard, and to Whiskey Row. (Currently, pedestrians often must walk down the alley to either Goodwin or Gurley street to get to Montezuma Street's Whiskey Row).

The courtyard walkway will be open to the public during business hours, and the restrooms will be open when vendors or activities are on-site, Nancy Hinson said, adding that the operation of the courtyard would be "a work in progress."

Savage said the initial construction would involve grading of the lot and installation of underground utilities. Soon, work also will begin on a large performance stage at the rear of the lot, along with a concrete patio.

To help create a courtyard ambience, April Caley of Landscapes by Caley said the plan includes the planting of mature maple trees, along with flowering plants and blooming vines. The landscaping also will feature boulders, pavers, and stabilized decomposed granite.

The Hinsons see the courtyard as the first phase in the improvements to the lot, although they are uncertain when the next phase (including an elevator and storefronts) would take place.

"It's one step at a time," Nancy Hinson said.