Days Past: How slabs of silver in old Sonora gave Arizona its name 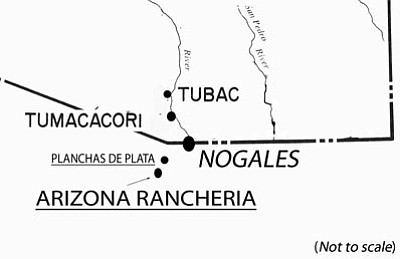 In January 1737, Captain Juan Bautista de Anza reported from his outpost in Sonora to his superiors in central Mexico that there were vast deposits of silver near the "Arizona rancheria" owned by his deputy mayor, Bernardo de Urrea. That discovery, known as the Planchas de Plata, had two results. The first was a struggle over ownership of the silver. The second was the adoption of the rancheria's name to identify the surrounding area as well.

Captain de Anza, a Spanish Basque, was the Justicia Mayor, or Chief Justice of Sonora, province of New Spain. He was also Capitán Vitalicio, or Captain for Life, of the Fronteras Presidio and father of the more famous Juan Bautista de Anza who, in the next generation, led Spanish colonists to San Francisco.

The silver find was extensive and included a single slab that weighed over one hundred arrobas, roughly one and a quarter tons, and sparked an immediate argument. Simply put, if this silver was natural and unprocessed, the finders would own it all - less the King of Spain's fifth. If it was determined to be "buried treasure," the king would own it all.

The isolated and unnamed location of the silver find was west of today's Nogales in modern Sonora, Mexico, and Anza named the site after his patron saint, San Antonio de Padua. Then he rode 12 miles to de Urrea's house where he spent the next week dictating and signing dispatches and orders, and impounding all the silver that had been found. Thus 16 important documents signed by Anza were written and dated at Bernardo de Urrea's house in el puesto (place) del Arizona. While the struggle for ownership was playing out in favor of the discoverers, the name Padua gradually disappeared from correspondence about the find, and the name Arizona came to the fore.

So now we come to the question: Where did the name "Arizona," given to the small group of houses where deputy Urea lived, originate?

Origin of the name "Arizona" has been the topic of speculation and debate for many decades, with most attempts trying to place its origins in the Spanish and/or Pima-Papago languages. Some of the theories have included: Arizuma from the Aztec by way of the Spanish; Arizonac and Ali Sonac from the Pimas; Aleh zone from the Papago; and Zona Arida from the Spanish.

It was not until fairly recent years that a new theory has emerged - that the name Arizona comes from the unique Basque language of northern Spain and southern France. Spanish Basques and their descendents were prominent in settling many areas of New Spain, and one familiar example of their influence is the de Anza family.

Dr. William A. Douglass of the University of Nevada first proposed the theory, followed by interpretive historian Donald T. Garate, who did additional research. Who chose the name for the site of Sr. Urrea's rancheria is unknown, but Mr. Garate has demonstrated that the name is derived from "the good oak" in the Basque language. Along the way, he showed that the common misspelling "Arizonac" came about through a later clerical error.

The name in Basque is formed like this: Ariz, or oak tree and ona, or good. Thus, Arizona means "the good oak tree" and is named for vegetation common to the area. (Adding a terminal "c" pluralizes the name.)

Because of the prominence given it by the silver find, the name Arizona soon was applied to the nearby area as well. It remained for the acquisition of the American Southwest following the Mexican War of 1846-48 and the Gadsden Purchase of 1854 for the name to take an even wider definition. By 1856, residents of the Gadsden Purchase area were clamoring to be split from New Mexico as a separate territory named Arizona. In early 1863 that desire was met - although for a much larger area.

Is the discussion of the source of our state's name over? Probably not, as historians tend to be a disputative lot.

The material in this article is adapted from articles written by the late Donald T. Garate and available on the Tumacacori National Park website.

"Days Past" is a collaborative project of the Sharlot Hall Museum and the Prescott Corral of Westerners International (www.prescottcorral.org). This and other Days Past articles are available at www.sharlot.org/library-archives/days-past. The public is encouraged to submit ideas for articles to dayspastprescott@gmail.com or call 928-445-3122, ext. 14.