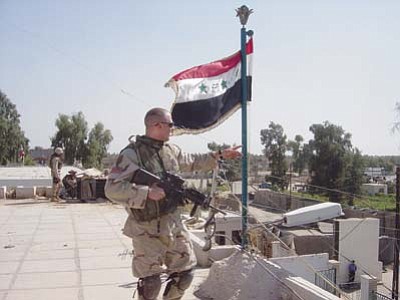 PRESCOTT - At one time, third-generation military officer and second-generation veterinarian Dr. Cameron Dow said he felt he knew northeast Baghdad better than he did his own country.

As an Army Ranger and Bronze Star recipient, the now 38-year-old who served between 2002 and 2006 said he and his platoon's duty a year after the Sept. 11, 2001, terrorist attacks proved to be the "Super Bowl of deployment," the invasion of Iraq that led to dictator Saddam Hussein's capture and execution.

After a first assignment to a United Nations peacekeeping force in Kosovo, the reconnaissance platoon leader was fully ensconced in the war against terrorism, a grueling, dangerous mission that required him and his fellow soldiers to quell the threat of insurgents pillaging a country in chaos. For their heroism, Dow and his fellow soldiers were awarded a Presidential Unit Citation Award.

Back home, his father, Dr. Steven Dow, a former Vietnam military officer, an Army Airborne Ranger and veterinarian with the Prescott Animal Hospital & Equine Center, was wrestling with a strong mix of emotions over his eldest son's life-threatening deployment. He said he felt such rage that the Iraqi operations seemed a political "echo" to Vietnam, the nation's leaders hesitating to show the military strength to do what needed to be done to assure a limited loss of American lives.

Even though the elder and younger Dow walked similar paths, Cameron Dow said his father never tried to influence him one way or another related to military service. In college, as a ROTC scholarship recipient, the younger Dow's patriotism was piqued and he saw his service as an "adventure."

The reality of the war, though, is clearly something more, experiences Dow said cannot be explained to those who have never known what it is to be in the line of fire or be required to pull a trigger.

"It was definitely an unforgettable experience," Dow said.

As he reflects on his time in combat, the married father of two young sons, aged 6 and 4, said he is "very proud" of answering his nation's call to duty, noting his decision to enlist was one of the best of his life and he would not trade belonging to a fraternity like no other.

"It's like going on a bizarre camping trip that no one else gets to go on," Dow said.

Even though he and his father both are combat veterans, he said the two do not swap war stories. They both, though, have found solace through their work with animals, and are both active with the nonprofit organization Soldier's Best Friend, which pairs companion dogs with veterans diagnosed with post-traumatic stress disorder.

On a day-to-day basis, Dow said his philosophy is to simply live life to the fullest.