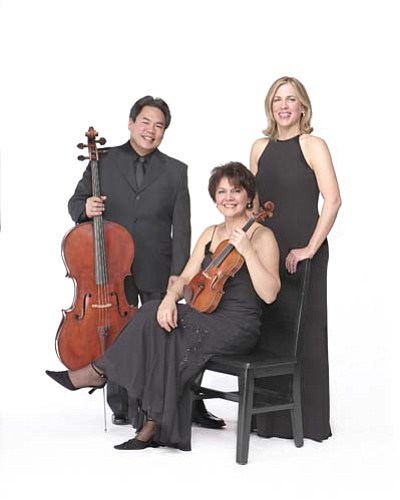 The Merling Trio will present a concert at 7 p.m. on Friday, Jan 15, in the Sanctuary of American Lutheran Church, 1085 Scott Drive, Prescott, as part of the ALC Concert Series. Suggested ticket price is $15 for adults; full-time students free. For information, call the church at 928-445-4348.

Members of the trio include Renata Artman Knific, violin; Bruce Uchimira, cello; and Susan Wiersma Uchimira, piano. The Merling Trio is recognized as one of today's premier ensembles. A truly international trio, it brings together musicians from Polish, Japanese and Dutch backgrounds. The Merling Trio has been hailed as a brilliantly distinguished group endowed with remarkable gifts of communication, magnificent precision, and an impeccable blend of sound. The trio made its New York debut in Weill Recital Hall at Carnegie Hall in 1993, and was named a finalist for the Naumburg Foundation Chamber Music Award in 1994.

The Merling Trio has given numerous recitals throughout the United States, Canada and Europe. Members of the Trio have performed with orchestras such as the English Chamber Orchestra, the Honolulu Symphony, the BBC Scottish Symphony Orchestra, the Concerto Soloists of Philadelphia and the South Carolina Philharmonic, under the baton of such notable conductors as Daniel Barenboim, Simon Rattle and Christoph Eschenbach.

In residence at the School of Music at Western Michigan University, members of the trio have also been faculty members at the Schlern International Music Festival and the ENCORE School for Strings. Renowned educators, their students hold positions in major orchestras and chamber ensembles throughout the world. Festival appearances include the Banff Centre for the Arts, the Pensacola Summer Music Festival, the Skaneateles Festival, the Saugatuck Chamber Music Festival, and the Fontana Festival of Art and Music.

The Cleveland Plain Dealer said, "The players shaped a grand interpretation, fluent in rhythm and rich in romantic feeling." The Grand Rapids Press has said, "The trio...delivered a standard of playing that is on par with some of the best known violin-cello-piano teams, captivating the audience through the immediacy and extraordinary sensitivity of its playing." The London Musical Opinion declared that the Merling Trio "made a powerful impression, with unabashed romanticism and finesse."

The Merling Trio takes its name from the Danish violin maker, Paul Merling. Currently, Mr. Uchimura performs on an Enrico Marchetti cello, made in Turin, Italy,

in 1899. Ms. Knific's violin, fashioned by Vincenzo Postiglione in Naples, Italy, dates from 1898. For information on the trio, visit www.merlingtrio.com.