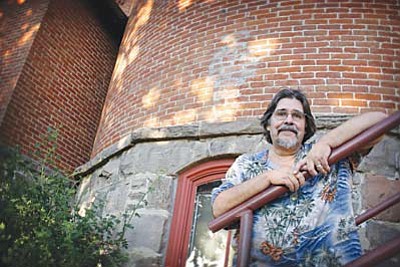 Courtesy photo<br> Looking to the future, Tom Agostino of Folk Sessions has a desire to focus more on live concerts as well as be a little more serious and organized about them. He also wants to put out a third compilation CD.

It's not every day a long-running local feature has an anniversary. But Folk Sessions, Prescott's longest running locally produced radio program, is celebrating 13 years on Saturday, Dec. 19. Founded in 2002 by Alexa MacDonald and Tom Agostino, the show has featured more than 350 musical guests and Agostino, who remains the show's host, won the 2013 Bucky Award for Media.

Folks Sessions started after Agostino and MacDonald got involved with Sharlot Hall's Folk Music Festival in 2002, Agostino said. He was managing one of the stages and would take a musician and broadcast them on the air after their set, he said. The show debuted in December of that year.

"I just happened to be in the right place at the right moment," Agostino said.

MacDonald remained the co-host of Folk Sessions for six years before moving to Portland, Oregon, Agostino said. He remains the sole host.

Plenty of memorable moments have been formed for Agostino throughout the 13 years the show has been on. One of which was the second week on the air, when after going on a rant about the Iraq War, Agostino realized he had been cut off the air after two minutes, Agostino said. He was then advised that while he couldn't talk politically, he could play any song he wanted.

"I'm really grateful for that piece of advice," Agostino said, bringing up the large amount of anti-war folk songs there are.

One of Agostino's favorite moments was 11 years ago during a live show, he said. He and MacDonald had Tom Chapin, brother of Harry Chapin, sing "Cat's in the Cradle" live on the air. It was a thrill, Agostino said.

With all the hundreds of musicians who have appeared on the show, a lot of friendships have been made, Agostino said. Though he doesn't see them much due to schedules that require a lot of traveling on the musicians' part.

"That's kind of neat," he said. "I get to live vicariously through them."

Looking to the future, Agostino has a desire to focus more on live concerts as well as be a little more serious and organized about them. He also wants to put out a third compilation CD.

In everything, it's been the fans and people who listen and come to the shows that have kept Folk Sessions on the air for 13 years, Agostino said.

"My greatest thank you is to the people who tune in, go to the shows, and support the show," he said.