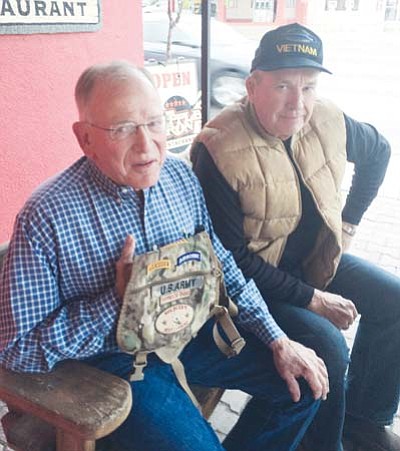 PRESCOTT - Steven Dow and Kent Erwin's brother-like friendship - with long lapses in visits during Erwin's career abroad - was forged when they were young Army officers training for combat in Vietnam.

Dow, 68, is a longtime Prescott veterinarian who with his wife, Janeth, has two adult sons, Cameron and Tristan, and six grandchildren. Erwin, a widower, spent his career as a civil engineer. He and his late wife, Rosalind, whom he met in Australia, have two adult children, Thaisa and Royce, and one granddaughter.

Over breakfast at the Waffle Iron where the buddies are familiar faces, the two men recently reminisced about their days in Vietnam; their spirit of adventure and duty quickly turned into a quest to survive and bring their fellow soldiers home.

For Dow, the military is a family tradition. His father, Herbert, was a B-17 pilot who flew 35 missions over France and Germany in World War II. His eldest son is an Army Ranger who served four years in the Middle East.

"I wanted to go to Vietnam. I was going to save the world ..." said Dow, who went in the Army in 1969 and shipped to Vietnam in 1970. He earned a Purple Heart after he was shot in the hand during battle.

His medical treatment required hospitalization in both Japan and San Antonio, Texas, humbling, disturbing experiences as he witnessed young men with far more devastating, life-altering injuries that he admits "freaked me out."

He and Erwin were both honorably discharged from the Army as captains; Erwin's discharge was in 1971; Dow's in 1973.

Erwin's introduction to Vietnam was not as a military officer, but rather as an engineer trainee. He was in Da Nang the summer of the Tet Offensive in 1968. He recalls getting "rocketed" on his first flight to Saigon.

A year later, Erwin was headed to basic training in Fort Benning, Georgia, where he met Dow.

"I had a hot Corvette and he had an ugly truck," Erwin joked.

Unlike Dow, Erwin had no desire to be an infantry officer. He made a futile appeal to Washington for a different assignment.

In the end, Erwin was tasked to head up a mobile advisory team at a large Vietnamese village. His role was to train the South Vietnamese there how to defend their home.

For nine months of his yearlong duty, Erwin and his Vietnamese charges were either targets of gunfire or dodging land mines in the swampy jungle Delta region. At the same time, Dow was a platoon leader in the central Highlands where he and his charges were also dodging bullets.

Both Dow and Erwin earned their first promotions while stationed in the jungle. Almost in unison, the two say it was an Army gesture to those who survived.

"The life span in combat for second lieutenants was about seven minutes," Erwin said of statistics highlighted in the military's "Stars and Stripes" newspaper.

Like many Vietnam vets, Dow's and Erwin's return to civilian life was a new reality, with no hero's welcome.

Erwin landed in Oakland, California, where he immediately ditched his uniform and retrieved his stored motorcycle for the ride back to Arizona. He spent the next 14 months "bumming around getting my head back together."

Dow later joined him in Scottsdale, where the two shared an apartment. It was a self-inflicted withdrawal from their new world, Dow said.

A year later, Dow returned to his education. Erwin accepted an overseas job that led to three decades in nine different countries.

Looking back, Erwin said he was an "adventurer" who once in the jungles of Vietnam strived to "do a good job and stay alive, and keep the men who worked with me alive."

Nowadays, Erwin keeps a busy schedule, relishing the out-of-the-ordinary over the mundane. His itinerary this month includes trips to Colorado and Australia.

Likewise, Dow also likes to stretch his boundaries. One of his sojourns was a climb up Mount Kilimanjaro in Tanzania.

But he is quick to say animals have proved his saving grace.

"It was a passion, not a job," Dow said of becoming a veterinarian.

He and his eldest son, who followed in his father's military and veterinary footsteps, are both active with "Soldier's Best Friend," a nonprofit agency that matches veterans diagnosed with post-traumatic stress disorder with canine companions.

"I'm sure it's (the profession and philanthropy) that allowed me to continue to function in the world," Dow concluded.