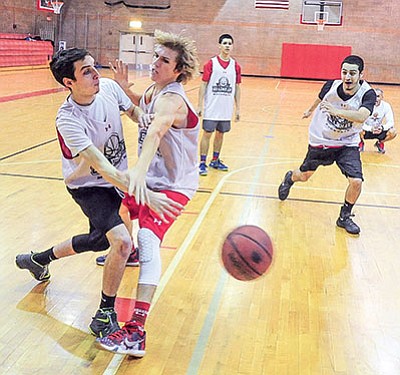 Bigger. Faster. Better shooters. Team chemistry. These seem to be the building blocks the Bradshaw Mountain boys basketball team is looking to use as a foundation for the 2015-16 season.

Not to mention, a new basketball coach.

Doug Beilfuss, who manned the sidelines for more than a decade at Bradshaw Mountain, resigned after last season and took a job with the upstart Embry-Riddle Aeronautical University men's basketball program in Prescott.

What does that mean for the Bears? Change is coming.

First-year head coach Matt Simpson, who has 12 years of experience pacing the high school sidelines of Washington and Oregon, said this year's Bears team will be focused on "more of a team mentality" and making sure everyone can "contribute."

"We are fairly deep and we can bring in a lot of guys that can contribute. I want to get our bench ready and accustomed to playing," said Simpson, who played junior college basketball at Tacoma Community College, a powerhouse program in the NWAACC. "Everyone needs to be on the same page."

And creating a new culture, he said, is important because when players come into the gymnasium, it needs to be "all about basketball."

"The Bradshaw core covenants include making a commitment to your teammates. What you will and won't do, how you treat people, what you'll do in games with your attitude and behavior. ... Being trustworthy, things like that," Simpson said. "Creating this, it's more than just X's and O's, it's more than just playing on the court. It's how you carry yourself. It's growing up to be great young men of character."

One thing that hopefully won't change for the Bears is Gilbert Ibarra, a three-year varsity letter winner. The senior was Bradshaw Mountain's leading scorer last season at 18.3 points per game.

Ibarra said it's been an adjustment under Simpson.

"It's different for the guys. We were used to Doug (Beilfuss)," Ibarra said. "We've done more conditioning. We plan on being the best in shape team in our section. I think on offense we are going to run-and-gun. Be quick, and beat teams down the floor. And on defense, we need to help each other out."

And if the Bears can accomplish that, a Division III, Section I tournament berth awaits, he said.

"Our coaches are really strict on the details, the little things. And teamwork, and giving everyone high fives, and be encouraging," Ibarra said. "Everyone is quick and athletic. We can dribble and everyone can shoot from outside, so that's nice."

Senior Marcos Perez said some of the changes have been good, but most of all, he sees a change in the product on the floor.

"We're a little bigger than in the past, we are faster and a better shooting team. We are all around a better unit together," Perez said. "We're not hoping to make sectionals this year, we are expecting it. We have state on our minds."

We've been playing together since freshman year. Hopefully that will be to our advantage this season," Taylor said, adding the Bears need to improve on their communication, but they can still go far.

"I feel like we're going to go far. We have a new coach this year, who has brought a lot of new things and new sets, so hopefully that will be to our advantage this year as well," Taylor said.

The Bears are off to a strong start after defeating Payson 76-48 on Monday to open the season. They traveled to Flagstaff on Tuesday to face Coconino.

"Things are going well," Simpson said. "We are getting used to each other, new style, new plays and new culture and what we're doing as a program."

Next home game is Wednesday, Dec. 9 against Goldwater.