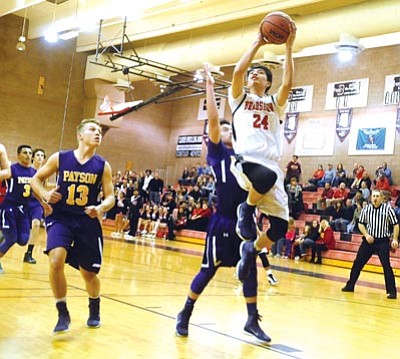 Ibarra added six rebounds, two steals and an assist to his stat sheet against the Longhorns. He scored 20 of his 25 points in the first half, including a 75-foot heave near his own bench that banked in as time expired to end the first half.

"The environment was incredible. The bench was alive. People were high-fiving, helping people up, it was awesome," Ibarra said about the game. His three-quarter-court shot gave the Bears a 46-26 lead at the break.

"He's a confident player. He's been playing in the system for four years, three years before I got here under Doug (Beilfuss), and he's just ready to go," Simpson said. "If one thing is not working, he finds a way to get others involved. He's a multifaceted player and has a skillset at multiple levels."

Simpson said if Ibarra's offensive game isn't working, he gets it done on the defensive end.

"He has to be that versatile player for us. He has to be able to do a lot of the little things that may not always be stat oriented," Simpson said. "I challenged him at that. Coming in, I knew he could put the ball in the hole, but what could he do, what areas could he improve upon to make us a better team. And I think he showed some of that tonight."

Coming off the Sunnyslope tournament over Thanksgiving break, which saw the Bears go 1-2 overall, Ibarra said things didn't "go how we wanted it to," but it was nice to get the games out of the way.

"At the tournament, teams were up in us, and we didn't like it," Ibarra said about the defensive pressure other teams were applying on the Bears, causing heaps of frustration. "That's our mentality now, we have to be up in guys. We're not very tall, we're not very big, so we have to get up and play defense."

And play defense they did.

In the first quarter of play, Bradshaw Mountain immediately turned up the heat defensively, recording six steals in the first 3 minutes of action to take a 11-0 lead off a blocked shot by Ibarra, who sprinted down the floor for the layin.

It was 17-0 with 2:47 to play in the first half before Payson forward Dimitre Sleeuw scored the Longhorns' first bucket of the game.

The second half was much of the same, but Payson adjusted well and stayed close throughout, keeping it at a respectable 20-point margin. The Longhorns were only outscored by Bradshaw Mountain 30-22 in the second half.

"Payson is a good team," Simpson said. "They are real physical and strong, but I think that when it comes down to five-on-five, and you can get guys uncomfortable doing things they don't want to do, things take care of themselves."

After the game, Simpson commended his squad on a job well done against Payson by saying his team learned a few things over the Thanksgiving break.

"We went down to that Sunnyslope tournament over Thanksgiving break and we got a big reality check. Where we were and where we need to be at," Simpson said. "Coming home, and moving forward it was, we have to really get after it defensively. We have to get more deflections, more tips on balls, steals, get into guys faces. We're still trying to stay out of foul trouble with that concept."

And for the most part, Bradshaw Mountain was able to do so against Payson (0-1 Overall).

"(This) was kind of our philosophy, our plan moving into this game. Start strong. Run. We've run a lot in practice. Our goal is to be in better shape than our opponents," Simpson said. "All of that combined, we really set the tone for how we are going to play defensively."

Next up, Bradshaw Mountain (2-2 Overall) will travel to Flagstaff tonight to play the Panthers of Coconino. Tipoff is scheduled for 7 p.m.

The Bears will return home Wednesday, Dec. 9, to play Barry Goldwater at 7 p.m.