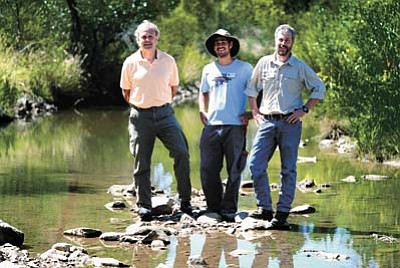 PRESCOTT - In recent decades, the leafy green corridors of Watson Woods and the Downtown Greenways have become "backdrops" to the community - popular gathering spots for people and wildlife.

It didn't happen automatically, however. Since 1990, a group of creek advocates has been working to clean up the network of riparian areas running through Prescott.

Among the organization's major achievements: Watson Woods, the stand of trees along Highway 89, south of Watson Lake.

Today, a walk through Watson Woods offers a respite among massive cottonwoods, swaying willows, fields of wildflowers, and buzzing cicadas.

Michael Byrd, the executive director of the Prescott Creeks organization, remembers the early efforts to remove debris that littered the stretch of Granite Creek that runs through the woods.

"Watson Woods used to be a city dump," he said. A sand-and-gravel operation had also operated in the area, Byrd said, and the woods had become patchy in places.

Prescott Creeks (officially, the Prescott Creeks Preservation Association, PCPA) was founded in the spring of 1990 under the leadership of three creek advocates in the community - Bette Bridgewater, Betty Siegfried, and Jay Eby.

Originally, the organization focused on better use of the creeks in Prescott's downtown. Inspired by a trip to the San Antonio Riverwalk, members ultimately succeeded in building a nature trail along Granite Creek - a section that would later become part of the city of Prescott's 1.5-mile Greenways Trail System.

"The greenway strip around Granite Creek has become such a backdrop to the community," said Peter Pierson, development and communications manager for Prescott Creeks.

In 1994, the early group merged with three Prescott College students - Eric Glomski, Jim Donovan, and Brooke Parlette - who were working to preserve Watson Woods, a 126-acre tract of city-owned land.

That led to a 25-year contract with the city of Prescott - negotiated in 1995 - for stewardship of Watson Woods, later named the Watson Woods Riparian Preserve.

With that, a multi-year effort to restore Watson Woods got underway. Byrd became involved in the mid-1990s as a student at Prescott College, and was officially hired in 1999.

Over the course of the $1.5 million restoration (the bulk of the money acquired through Arizona Water Protection Fund grants), Prescott Creeks planted about 20,000 tree cuttings, and worked to redirect the stream flow of Granite Creek to a more natural path, Byrd said.

Pierson pointed out that over the decades of industrial uses, the stream had been rerouted to a straighter course. That, in turn, allowed all of the water and pollution from Granite Creek to run directly into Watson Lake.

By creating a more natural stream flow, the restoration has allowed for more vegetation growth, which ultimately helps to filter the runoff, Pierson said. "By the time it gets to Watson Lake, it is much cleaner," he said.

Other highlights of Prescott Creeks' first 25 years include:

• Outreach and education on practical steps to improve the water quality of area creeks and lakes.

• Development of green infrastructure rain gardens and natural landscape projects at the Adult Center of Prescott, and at the intersection of Willow Creek, Miller Valley, Iron Springs, and Whipple streets.