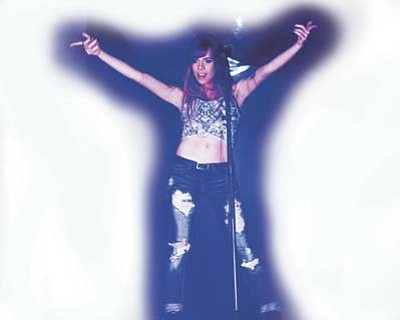 Four years after appearing on the Fox Network's "The X-Factor" and finishing in sixth place, Chino Valley resident Drew Ryniewicz released her first single, "Ugly," at a hometown benefit concert at Matt's Saloon Tuesday, Aug. 25. Remembering her time on the show and calling it the start of her career, Ryniewicz also looked to the future and where she plans to take her music.

From a young age, she felt music was the only thing she was good at, Ryniewicz said.

After falling in love with music at such a young age, Ryniewicz began singing publicly as she grew up and knew that she wanted to make it a career when there was positive response, she said. However, while she sang publicly in other venues, she considers her time on "The X-Factor" as the start to her career, Ryniewicz said.

She was 14 when she appeared on the show. She wanted to do it to because Simon Cowell was someone she wanted to meet her whole life, having watched "American Idol" growing up, Ryniewicz said. Feeling that criticism from Cowell would be real, when she found out he was going to be a judge on "The X-Factor," she auditioned with the goal to meet him and hear what he had to say about her voice, she said.

"Simon was awesome. He would be very blunt, but very encouraging ... and so I really loved working with him," she said. "It was really the start of my career in a good way because I was getting criticism from a young age and I was being pushed to do things that I didn't know that I could do."

In four years, Ryniewicz went from "The X-Factor" to Matt's Saloon. She said it's been amazing and called it a long journey, noting the rapidity of recent events. Having been songwriting, spending time in the studio and finding her sound for those four years, she wrote the album that debuted on Tuesday in two weeks, Ryniewicz said. And though she had written many other songs previously, when she and the other songwriters sat down, the songs pretty much just wrote themselves, she said.

But "The X-Factor" wasn't Ryniewicz' first competition. She performed in Prescott Valley Idol and Northern Arizona's Got Talent, as well as winning Prescott Idol. With this year's Prescott Idol Finale happening in September, Ryniewicz said the key for the finalists is to remember to be themselves and enjoy what they're doing.

"That sounds cheesy, but I forgot to enjoy myself so often and I'd find myself being so stressed that I wasn't enjoying myself and I don't want to be that person," she said. "As a performer, you're supposed to get on stage and really give the audience the whole you and you should really be giving them the excitable you, the happy you. Just be who you are and know who you are from the beginning and to be happy doing it."

Ryniewicz said she is going to continue writing music, and she is already doing so for other artists. However, she said she would like to expand her songwriting and put out a full album after the EP.

"This EP is only six songs and so I want to continue writing and I'm ready to start writing onto the next record."