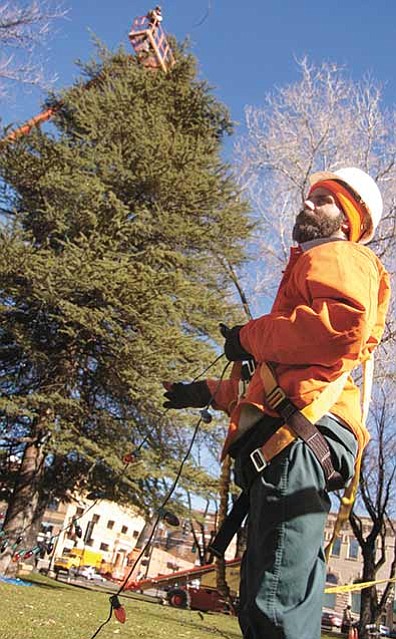 "People say, 'it's only August,'" Maurer said of the common reactions to the preliminary Christmas-decoration work that typically takes place at the end of summer.

But Maurer and Prescott Downtown Partnership Director Kendall Jaspers say there are a number of reasons it makes sense for Mesa company Christmas Lights Decorators to begin the work now. One of the major factors: Weather.

"They like working here at this time of year, because it's not so hot," Jaspers said, noting that the company also has decorating jobs in the Valley, where temperatures are considerably hotter.

In addition, Maurer pointed out that the lighting of the courthouse plaza takes place in early December, and the final installations take place in early November.

"It's really not that far away," Maurer said. "The schedule is pretty standard each year. In late August/early September, Christmas Light Decorators sends a crew out, and they get started."

Jaspers said the company's workers likely would work for two to three days next week to wrap the upper reaches of as many as possible of the 100 plaza trees designated for lights. Workers will leave the bottom portion, which is within reach without a bucket truck, for later in the fall. Daytime work will focus on the trees on the outer perimeter - farther from the courthouse - while the night work will focus on the interior trees.

Maurer said much of the remaining decorating work will then take place on Veterans Day, Nov. 11, when court

is not in session at the courthouse.

While the number of lighted trees will stay the same this year - at roughly 100 - Maurer and Jaspers point out that several other new features will be added.

For instance, this year's decorating project will take in the Veterans' Island Park at the Gurley/Sheldon intersection. Maurer said the island decorations were previously done mostly by volunteers, but now have been added to the courthouse contract.

Some changes are in store for the island park, Jaspers said, such as a "light tree," involving a pole with strings of lights arranged in the shape of a Christmas tree. "It should show up really well at the entrance to town," he said.

Other changes this year include the installation of new lights on the tall Statehood Tree on the courthouse plaza,

Jaspers said, as well as new features for the four corners of the plaza.

Along with the plans for the light installations, Maurer said the Courthouse Lighting fundraising effort is also well under way. About a month ago, the Chamber sent out

letters to its past donors, and has

already received a number of contributions back, including one for $2,500. Other contributions typically total anywhere from $10 to $250, Maurer

In 2014, fundraising totaled $98,500, including the annual $30,000 contribution from the city of Prescott, and the $22,000 that the Friends of Jersey Lilly raised in the fundraising effort that is centered at the Jersey Lilly Saloon on Whiskey Row. Maurer said any money that is not used is routinely carried over for the next year.