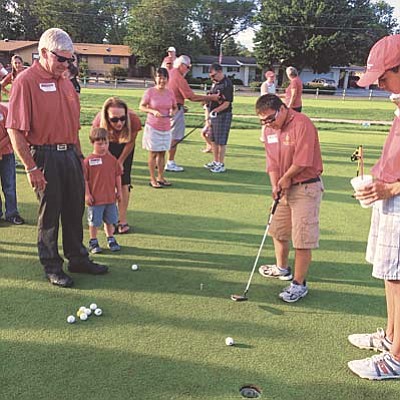 You could tell by the joyful glint in coaches John Gunby and Wayne Guthrie's eyes late Thursday afternoon that another season for the Bradshaw Mountain Special Olympics golf team was around the corner.

As they and several other of the team's volunteers gathered for the first practice of the 2015 season at Antelope Hills Golf Course, athletes both new and familiar with the program trickled onto the back patio of the clubhouse.

Under bright and hot, sunny skies, Gunby and Guthrie, among the organization's 30-plus other volunteers, matched themselves up with their own group of players, who range from children ages 6 and 7 to adults in their 50s to early 60s. They then gathered the clubs and balls that each one of them brought to tutor the athletes.

Participants primarily come from Prescott, Prescott Valley, Chino Valley and Dewey-Humboldt. And their challenges range from autism to Down syndrome, oftentimes in combination with physical impairment.

Each new athlete is paired with a volunteer coach who's deemed best at accommodating that individual's needs. Volunteer coach Jerry Behm, Chino Valley High's golf coach, has been with the Special Olympics golf program here since it started.

"We divide them (players) into (those who are still developing their) skills and players," Behm said. "And 'skills' are the kids where we come out and we work on their chipping and their putting. We have a game we play where we put up a wall and the kids try to chip over it and they get points when they do it. And they're very enthusiastic about it."

Gunby, who inaugurated the program five years ago, is a golf pro at nearby Prescott Lakes Golf Club. Like Guthrie, Gunby beams when you talk to him about Special Olympics and the love he shares for the athletes who've participated through the years.

"We try to figure out what connects with them," Gunby said before practice on Thursday about how he coaches special needs athletes. "It's usually not language. It's modeling."

But what about teaching the mechanics of a golf swing? Isn't that part difficult?

"Not really," Gunby said. "It's just sticking a club on a ball. We might do a clock, tick-tock (as you move the club with your hands). We might draw a spider on the back of the ball and have them squish the spider. We might sing a song. Whatever works."

One of the ways the athletes learn to focus is through the popular "Putt for Bucks" activity.

Toward the end of each practice this season, each of the players has a chance to putt on the putting green for an opportunity to earn a few dollars.

Each player starts at a certain distance from the hole with the help of a volunteer coach. If he or she makes the putt on the first try, it's a $3 haul. If not, the ball is placed a little closer to the hole. Make that shot and you receive $2. If you don't convert the $2 putt, you move in a little more for the next one. Drain that putt and you get $1.

It never fails. Whenever a putt is made, everyone in the group gathers around to cheer and congratulate the athlete, who pulls the money from the hole's cup, oftentimes with a tooth-filled grin.

"They know what money is," Gunby said, laughing.

Over the course of the season, the players save the money they earn for get-togethers, such as heading over to Peter Piper Pizza in Prescott to eat some food and play video games.

Volunteer Nora Tuggle and her husband donated $250 to Putt for Bucks this year. It's so gratifying for them that they plan to continue doing it.

One of the program's beloved athletes, local teen A.J. Faulkner, died in a tragic car accident late in 2014 and the program is memorializing Faulkner this season by wearing new fire-engine red golf shirts with gold-embroidered emblems on them. (Last year the team honored the 19 Granite Mountain Hotshots who died while battling the Yarnell Hill Fire in 2013.)

One of those emblems is an "AJ" stitched on the left collar of each shirt, which acts as a constant reminder of what the 18-year-old with cerebral palsy meant to everyone who knew him.

"He was just a little character," he added.

When Bradshaw Mountain Special Olympics golfer Ryan Stamper, a close friend of A.J.'s, arrived at the clubhouse on Thursday, Gunby asked him, "What's this mean? ... A.J.," pointing to the initials on the collar of his shirt.

Alice Faulkner, A.J.'s mom, said her son played Special Olympics golf for about three years, and was involved in baseball and soccer.

The golf program here started with a total of 10 athletes. It has now doubled in size to 20-25 committed athletes. (Organizers say they won't have an official number of players for another two weeks.)

Linblom, who's autistic yet high-functioning, also has Asperger's Syndrome and Attention Deficit/Hyperactivity Disorder. He said he played in Special Olympics soccer, baseball, track and basketball before he contemplated golf. He was an assistant coach in basketball, too. These days Linblom works for Yavapai Exceptional Industries (YEI) in Prescott.

Linblom said Special Olympics' volunteers on the golf team, as well as his teammates, have helped him the most with his swing. He plays in the local Veterans Affairs (VA) league, too.

"Through here, I learned how to kind of control how I hit (the ball)," Linblom said. "I try to keep the club as straight as I can, but it's always hard for me."

Gunby, who used to coach a Special Olympics team in Tempe and the East Valley Friendship League, said volunteers "get a lot more than what you give" from the experience.

"Just the satisfaction - just a smile from them, a laugh," Gunby added about working with the athletes. "And also seeing all the rest of these people work together toward a common goal."

Guthrie said Gunby teaches the volunteer coaches about how to best instruct the athletes.

But Gunby said he leans on Bradshaw Mountain Special Olympics' Kim Stamper for advice. Kim and her husband, Mark, adopted nine special needs children, including Ryan, and knows the athletes in the program best.

The golf season lasts about three months. Later in the season, the team plans to compete in a Special Olympics regional meet. The state meet is to be determined, Guthrie said, because the venue that Special Olympics used in the past wasn't available in 2014 and may not be available this year.

In the end, though, the experience's meaningfulness boils down to those involved in the program, from the volunteer coaches and players to the parents and other loved ones who support them.

"They're just great people," Gunby said. "You can't get better than that."