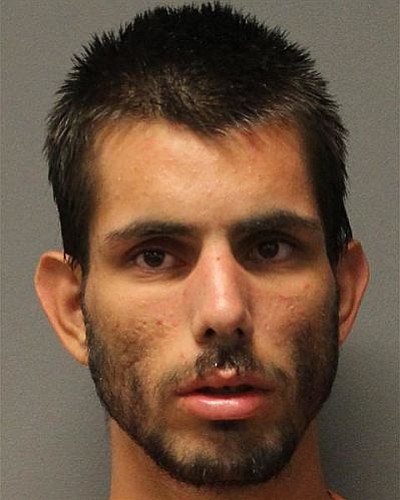 McGUIREVILLE - Yavapai County Sheriff's deputies arrested a man they said got into a physical fight with another man on Tuesday, Aug. 11, and left him with a non-life-threatening stab wound, YCSO spokesman Dwight D'Evelyn said.

Deputies responded to a call of a stabbing in the 2100 block of Beaver Creek Road, D'Evelyn said, where they found the victim, a 41-year-old man, with a "significant stab wound above his right knee above the thigh."

The victim told deputies that Alan Sigarto, 22, slammed the door to his trailer, which led to an argument.

"(Sigarto) punched the victim in the face and then threatened to stab him while brandishing a knife," D'Evelyn said. "The victim reacted by tackling (Sigarto) and holding him on the ground to control his movement."

When the victim released Sigarto, he found he had been stabbed.

Sigarto ran from the scene before deputies arrived, but he was located and arrested in the 4100 block of East Valley Lane in Lake Montezuma.

Both the victim and the suspect's mother, 42, who lives with the victim, were threatened with a large pipe that Sigarto dropped when he ran.

He's been booked into the Camp Verde jail on several charges, including assault with a deadly weapon, assault or threats per domestic violence and disorderly conduct.