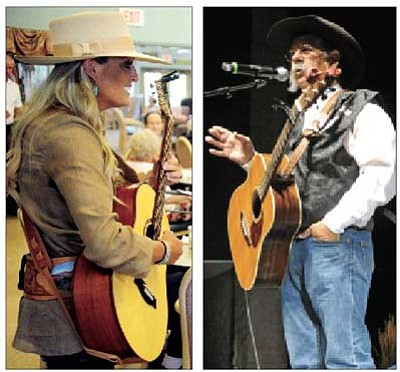 Since Thursday, Aug. 6, poets and singers have been reciting verse and crooning at the Yavapai College Performing Arts Center as part of the Arizona Cowboy Poets Gathering. However, the Arizona Cowboy Poets also planned several community outreach programs. One of which was poetry and music in several area senior homes. Trinity Seely and Deanna McCall performed at the Susan J. Rheems Center in Prescott Valley.

Trading off on reciting poetry and singing, the duo would talk a little bit about their songs or verses and tell a bit of story behind them. One of Seely's songs, "The Little Things," was about how she and her husband continued to stay so much in love after so many years. Introducing it, she spoke of a storm that blew in on Mother's Day weekend, noting that she and her husband had to drive through their ranch and pick up as many newborn calves as they could.

"From that experience, I got a staph infection on my leg," she said, adding that she's not much of a hospital person and wouldn't go in until prompted to by her husband. When the doctor looked at it, she said he wrote a couple prescriptions and "told me this one is for your husband. I looked at it and it said, 'Jeff, quit working your wife so hard.' I like to work hard and it's not so much a bad thing."

Another song that Seely had performed was written for her father and the special place where she was raised. Seely said that growing up, the temperature averaged 40 below from October to March and the water would eventually freeze. However, she mentioned that the experience was the "greatest thing my parents ever gave me," because she learned how to do without.

Following the performance, McCall said that she loves being able to share her poetry with seniors because it brings back old memories for them that are agriculturally based.

"You have to remember, their generation was ag based," she said. "That's when the majority were rural people."

Echoing that statement, Seely said that when playing for them, every now and then she'll see the light come on and loves being able to share and see that light. She spoke of always meeting people from the same walk of life that she's from.

For a schedule of poets and singers, visit www.azcowboypoets.org. Seely is also Saturday night's featured performer, taking the stage at 7 p.m. Tickets for the Seely performance range from $20-$55 and can be purchased online at www.ycpac.com.