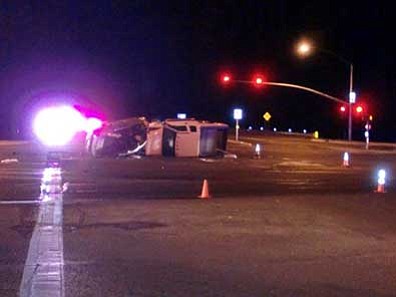 A crash on Highway 69 at Fain Road Saturday night, April 18, resulted in one man's death.

At approximately 10:28 p.m., Prescott Valley police officers were dispatched to a report of an injury traffic crash on Highway 69 at the intersection of Fain Road.

A White Ford F-350 pickup truck driven by a 39-year-old man from Parker, Arizona, was eastbound on Highway 69 approaching the intersection of Fain Road, when the truck went left of center into the oncoming lanes of traffic. The Ford pickup truck collided head on with a silver Chevy Impala occupied by a 69-year-old man from Dewey, Arizona.

The man from Dewey was pronounced deceased on scene by medical personnel. His identity is pending notification of next of kin. The man from Parker was flown to a Phoenix Hospital in serious condition.

Highway 69 east and westbound was shut down between milepost 284 and the intersection of Fain Road for approximately five and half hours. The cause of the collision is under investigation by Prescott Valley Police Department.

Watch dCourier and The Daily Courier for details as they become available.