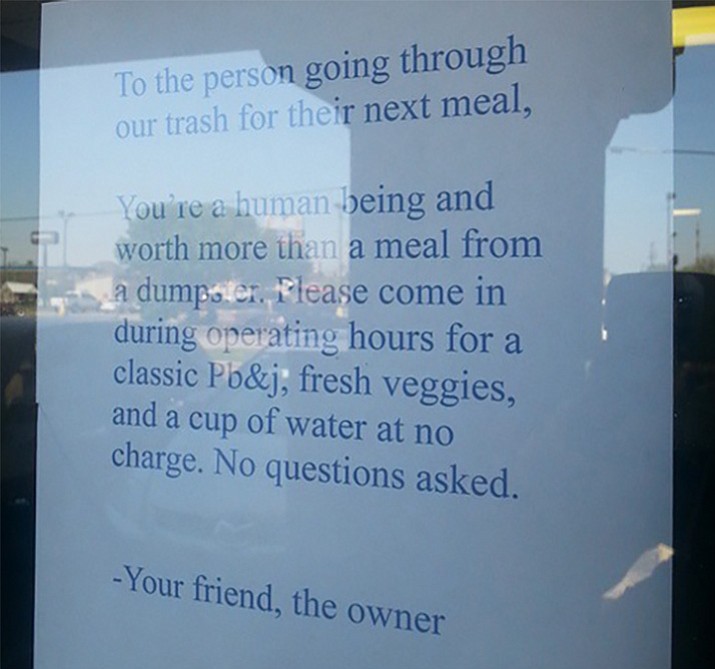 A restaurant owner in Warr Acres, Oklahoma found evidence that someone had been opening garbage bags in her dumpster and taking discarded food.

"It hurt me that someone had to do that," said Ashley Jiron of P.B. Jams.

Rather than lock up the dumpster or call police, Jiron posted a sign with these words:

To the person going through our trash for their next meal,

You're a human being and worth more than a meal from a dumpster. Please come in during operating hours for a classic Pb&j, fresh veggies, and a cup of water at no charge. No questions asked.

- Your friend, the owner

Jiron later explained, "It was just something that I thought would be a nice thing to do... I didn't really think anyone would notice."

But people did notice, and they shared what they felt.

Area residents started asking how they could donate a meal to someone in need.

Acting on this public desire to help, Jiron started a simple pay-it-forward campaign at P.B. Jams.

Patrons can pre-pay a meal for a person in need. For each donation, a sticky nut (note) is placed on the restaurant wall.

Anyone in need can take a tag off the wall and use it to pay for their meal. Donations not used by the end of the month go toward purchasing food for a local homeless shelter.

"I've always lived by the Golden Rule" Jiron explained. "My parents taught me that. So I decided to do whatever I can to help them...By sharing our nuts, we aim to put the 'human' back into 'humanity.'"

So smart. So simple. So kind.