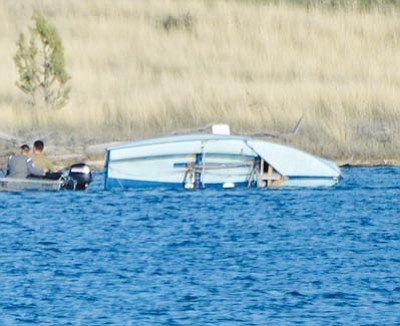 Matt Hinshaw/The Daily Courier<br>Rescuers head to a sailboat that flipped over on Watson Lake.

PRESCOTT - A small sailboat flipped over with two people aboard Thursday evening on Watson Lake.

The Tri-City College Preparatory High School rowing team was just finishing their practice for the day when the small boat capsized on the east side of the lake.

The team's coach Dr. Al Caccavale raced out to the sailboat with his electric-powered fishing boat, rescuing a husband and wife from the frigid water.

When the Prescott Fire Department's Engine 74 and Rescue 74 arrived on scene the couple was already safely on shore. The fire department used their powered rescue boat to help tow the sailboat to the south dock of Watson Lake after righting it.

Winds were averaging 10 mph at the time of the incident.