Mending hearts in Prescott a physician, peer and philanthropic priority 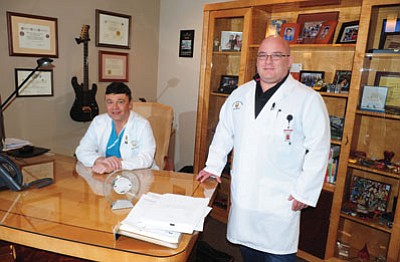 The then-Phoenix based cardiothoracic surgeon, hired to be the inaugural medical director of the hospital's new cardiac heart center in 2007, went out to dinner at one of the town's former historic restaurants, The Rose, and encountered a patient he treated in Phoenix.

Standing up, glass in hand, the grateful gentleman from Prescott offered an impromptu salute to Tibi, heralding the full-time arrival of the high-caliber, nationally acclaimed heart surgeon to this community.

"I want to introduce you to the man who saved my life," the successful open-heart surgery recipient declared to rousing applause.

In that moment before a roomful of strangers, Tibi was forced to not only swallow his embarrassment but grasp he was something of an anomaly, and no longer anonymous.

Tibi, and his fellow cardiothoracic surgeon, Dr. Jose Torres recruited from the University of Iowa Hospitals and Clinic last year, regularly run into patients in the grocery store.

"That's why we have to be nice," Tibi teases.

More seriously, though, Tibi said he is ever humbled to be somewhere in town and meet a former patient who is out and about because he was able to assure their heart still beats.

"Every single time, they are very thankful and grateful, and that's the best part of my job," said Tibi, who jokes he dreamed of being a rock star but his penchant for dissection from an early age prompted him to pursue his career in surgical medicine.

In the seven years since the opening of what is now known as the James Family Heart Center, Tibi and his surgical teams have performed 1,187 open-heart surgeries and double that number of lung and other chest area surgeries. In 2010, the James Family donated a $1 million gift that defrayed all the costs incurred with building the center, including construction of a 14-bed Progressive Care Unit as well as other improvements to the facility that includes two surgery suites, an eight-bed intensive care unit and two cardiac catheritization laboratories as well as spacious, living room-style waiting areas for families.

"We have the soup and the nuts," the good-humored Tibi said of what the center is able to perform when it comes to heart and lung surgeries as well as diagnostic testing.

The only thing the center does not perform is transplants, and artificial heart replacements; every other heart-related procedure, including valve replacements, pacemakers, angioplasty, stents and modern diagnostic testing are on the service menu.

Come the summer, Tibi said the hospital is launching yet another $4 million to $6 million center expansion to build what is called a hybrid room, a space where multiple surgical specialities work together to offer patients the most advanced treatments, including electrophysiology. With this latest technology, Tibi explained heart valves can be inserted without opening the full chest, a lifesaving procedure at a much lower cost.

Yavapai Regional also has a full blood management program that Tibi and other physicians hail for reducing the need for blood transfusions during surgical operations, protecting patients own blood cells to enhance recovery.

For Torres, who prior to moving to Prescott was skeptical about working in a smaller community that might not have the same technology as larger hospitals, this heart center has proved what he believes to be a diamond-grade facility, one with nearly unparalleled patient-centered care.

"We are offering modern, adult thoracic surgery that other (larger) places don't offer," said Torres who was looking to move closer to his roots in New Mexico. "Everyone has one goal, and that is to practice excellent patient care, and get them better than they were prior to surgery."

Ron Phillips is one of the center's very satisfied customers.

A retired Marine who five-and-a-half years ago ignored chest pains signaling his heart attack until it was almost too late, Phillips said he, too, owes his life to Tibi and the center's surgical team.

He and his wife, Nancy, are grateful he was able to undergo his quadruple bypass where he was most comfortable rather than in a big city of strangers. They, too, are glad that the cardiac rehabilitation facilities are also right on the hospital's westside campus.

At 72, Phillips works out with his fellow cardiac surgery buddies three days a week, eats healthy and enjoys a very active lifestyle.

His success story is one he is eager to share with those who like him find themselves unexpectedly find themselves facing their own mortality due to a heart ailment. His near-fatal heart attack was attributed to his exposure to Agent Orange in Vietnam.

So when he was asked to head up a local chapter of a national peer-to-peer counseling and support program called Mended Hearts, Phillips did not need his arm twisted.

Like him, most cardiac patients and their families are caught unaware. Then when they are faced with undergoing open-heart surgery, "It's panic time."

What Phillips and his now fellow crew of 11 Mended Heart cardiac surgery survivors do is visit patients and their families both as they are awaiting or getting prepared for surgery, or in the immediate aftermath. Their focus is not on the medical end, but on reassurance that this procedure will allow them return to the world, whether that is to their job as an accountant or their hobby as a fisherman or golfer.

Often times, Phillips said, a patient or family member will see him and say, "You don't look like there is anything wrong with you."

He informs them they are correct.

"I'm going to live a nice, long healthy life, and so is whoever going into surgery," Phillips advises.

He is clear nothing is as good an incentive to a lifestyle change than cardiac surgery.

"They are going to eat healthy and exercise the rest of their lives," he notes.

As of this year, Mended Hearts 'volunteers are available at the hospital seven days a week.

To Phillips, this volunteer work is his "pay back."

He is clear he only offers what the patients are willing to hear, and 70 percent of the times the conversation ends with a thank you for the reassurance and support.

"I just love it. That is when I know I really did my job. I relieved some of their tension. They actually believe what I'm saying.

That's my paycheck right there."