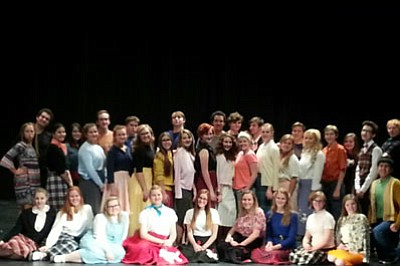 The cast of Prescott High School’s production of “Grease.” (Courtesy)

Prescott High School's Ruth Street Theater Players will take us on a musical journey back to Rydell High School's senior graduating class of 1959 later this week with the production of Grease.

You know the story...over the summer, Danny Zuko (played by Billy Barlow), leader of a group of school greasers known as the Burger Palace Boys, had a romance with a chick named Sandy Dumbrowski (played by Jordan Kliphon). Sandy had planned to go to the local Catholic high school in the fall, but ends up at Rydell High. When Danny sees Sandy talking with the Pink Ladies group led by Betty Rizzo (played by Alexa Reed), he changes his mood from excitement to a "cool" indifference, lest his pals think he's getting mushy with romance. Sandy is confused and hurt, but in the course of the year evolves from a shy, sweet girl into one of the tough-talking, independent Pink Ladies, even as Danny softens his edge by going out for the track team and apologizing of sorts to Sandy. Is he the one that she wants, or not?

Written by Jim Jacobs and Warren Casey, its debut on Broadway was way back in 1972. "Grease" has been an anthem for reminiscence and recollections of American high school kids then and now.

The current version playing borrows from the 1993 revival, which added some tunes from the film to the musical. Directed by Matthew Kiesling with choreographer by Summer Hinton of Summer's Danceworks in Prescott, this rendition of "Grease" has a flair and pizzazz, resulting in an evening that goes by way too quickly, leaving the appreciative audience longing for more.

"Grease" is packed with memorable, finger-snapping, good-time tunes, from the title song up front to the show-closing rocker; "You're the One That I Want," which was added to the Jim Jacobs/Warren Casey's score after its chart-topping success in the movie in 1978.

The audience should be aware that the stage version is not the same as the movie, but they will greatly enjoy the similarities. The stage version is worthy to stand on its own merits when compared to its Travolta/Newton-John sister.