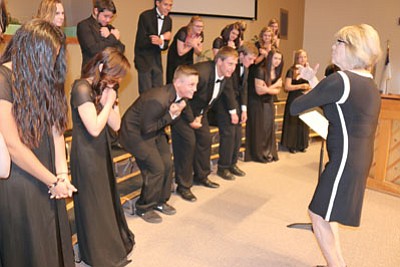 Choral Festival Judge Jill Burgett, Ph.D., of the University of Northern Colorado, gives “scrunch and open” advice to the BMHS Concert Choir after a performance Wednesday, March 25, at the Chino Valley High School Choral Festival. (Special to the Tribune/Salina Sialega)

High school Choir Director Amy Van Winkle told the distinguished judge at a two-day Choral Festival in Chino Valley this past week that she and her students are ready for any and all advice she had for them.

"We are clay; mold us any way you want," Van Winkle told Jill Burgett, Ph.D., the director of Choral Music Education at the University of Northern Colorado in Greeley, Colorado.

Burgett evaluated each group and reviewed specific suggestions for improvement. Burgett's tips included how word pronunciation in songs improves a performance, along with body language and facial expressions.

For example, to make more open-mouthed vowel sounds, Burgett instructed the students to hold out their arms in a circle for "O" words, and gently raise the arm to keep notes high and light. With another group, she had them show more expression with body movements.

Burgett has worked with choirs of all ages in schools, colleges and communities, including adult choirs. She has taken her choirs to international competitions in Europe, Brazil, Newfoundland and others.

Burgett said later that she thoroughly visiting Chino Valley and enjoyed an early-morning drive. "It's a beautiful part of the state," she said. She also said the young vocalists attending the festival were talented, open-minded, fun to work with and inspiring to her.

CVHS vocalist Sierra Shumate was born with hearing loss, and at an early age began to sing to herself.

"I could hear myself and since then I've always loved singing. It just stuck. It's a feeling of total self-expression," said Sierra, now a sophomore at CVHS and a member of the acapella Varsity Choir, which performed and learned new technique.

The choir sings a large variety of musical styles, which give Sierra many ways to express herself.

"Through music, you put together and convey different emotions, a way to express yourself without (speaking) words," Sierra said.

Fellow choir member, Ciara Moore, also a sophomore, has found her niche in singing and says music is a big part of her life.

"It's the only thing I'm good at," Ciara said. "If I don't listen to music at least once a day, I feel like something is missing." She has been in school choirs since sixth grade.