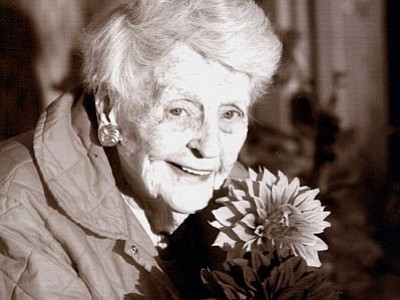 Margaret was born in Prescott, Ariz., on May 26, 1917, to pioneer ranchers, Roy D. Hays and Hazel Irene Kester.

Roy Hays was a descendant of Boone Hays, Daniel Boone's grandson, who drove cattle to California in 1849 and began the family ranching operations. Roy moved his family from California to Arizona in 1912 to start the Hays Cattle Company. Margaret grew up on the Hays Ranch in Peeples Valley, which continues to operate to this day.

She attended a one-room school located in the pasture near the ranch house. In 1926, Roy Hays provided property across the road for a larger school, which Margaret attended. One of her teachers was Betty Rigden, whose brother, Tom, was an occasional substitute teacher. Margaret and her sister, Elladean, took delight in the fact that they locked him out of the schoolhouse one day. Margaret later married Tom and he always joked that marrying her was the only way he could get even.

Margaret was a founding member of the Peeples Valley-Yarnell Historical Society, which has successfully preserved the schoolhouse and turned it into a local history museum.

After graduating from the Peeples Valley School, Margaret attended Wickenburg High School, boarding with family friends. She spent one year of high school in Shandon, Calif., living with her aunt and uncle, Alta and Don McMillan.

Margaret attended the University of Arizona for two years, studying liberal arts, fine arts and agriculture. She was an accomplished artist, whose paintings and drawings were included in many art shows in Arizona. Her love of art came from the painting lessons she took as a young girl from her future mother-in-law, Ada Rigden.

Margaret married John Thomas (Tom) Rigden, the son of neighboring ranchers, Charles and Ada Rigden, in 1938. After their marriage, they lived in Tucson for a few years and then moved back to Peeples Valley, where Tom helped Margaret's father manage the Hays Ranch. After Tom's father died, they moved to Kirkland to take over running the Rigden Ranch.

Margaret's interest and involvement in cattle ranching continued throughout her life. She was actively involved in the Yavapai County Cattle Growers, whose annual Calf Sale and Barbecue (a fundraising event for the Arizona and national cattlemen's associations) began at the Hays Ranch in 1932.

Even though she lived out on the ranch in Kirkland, Margaret was involved in many community activities. She was a founding member of Prescott's Chapter Y of P.E.O. (Philanthropic Educational Organization), a member of the City of Prescott, Yavapai County Library Advisory Board, the American Association of University Women and the Kirkland Women's Club. She was also a member of the Society of Mayflower Descendants and the Boone Society.

She was preceded in death by her husband Tom Rigden, sister Elladean Hays Bittner, and her parents, Roy and Hazel Hays.

A private family memorial celebration of Margaret's life will take place later in the year. In lieu of flowers, donations may be made to the Peeples Valley-Yarnell Historical Society, 18205 S. Highway 89, Peeples Valley, AZ 86332 (www. peeplesvalleyyarnellhistoricalsociety.com).