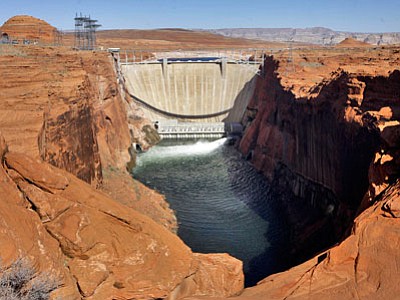 PHOENIX - U.S. Interior Secretary Sally Jewell and other officials on Saturday marked the 50th anniversary of power generation by Glen Canyon Dam, a structure that helped usher in a new era in the Southwest.

"Now, it's not without its controversy. But there's no question that this engineering feat was incredibly valuable to the economic future of this country," Jewell said.

Glen Canyon Dam, situated near the Arizona-Utah border, is a source of water and power for seven states in a region prone to drought. It is a key part of the Colorado River Storage Project and at 710 feet, is the second highest concrete-arch dam in the U.S. According to Jewell, the dam can store 27 million acre-feet of water - or the equivalent of two years' worth of the Colorado River's flow.

"This power plant produces enough electricity during the year to not use 2 1/2 million tons of coal or 11 million barrels of oil," Jewell said.

But since the 1960s, the structure in Page, Arizona, has blocked 90 percent of the sediment from the river from flowing downstream, turning the once muddy and warm river into a cool, clear environment that helped speed the extinction of fish species and endangered others.

Anne Castle, Interior assistant secretary of water and science, called the dam "the fulcrum" that regulates flows between the Colorado River's upper and lower basins. Castle, who is retiring, acknowledged a U.S. Bureau of Reclamation study that confirmed there will be significant shortfall between water levels and demand in the coming decades.

The bureau controls levers at the Glen Canyon and Hoover dams for a region that is home to 40 million people.