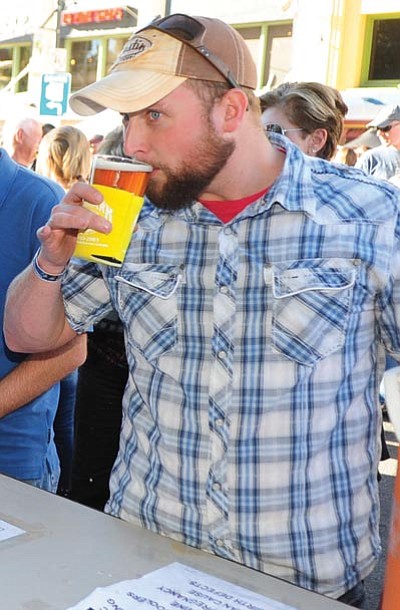 Justin Turk takes a drink from his freshly filled pint during the 2013 Oktoberfest celebration in downtown Prescott. The event’s 2014 installment runs from noon to 7 p.m. Saturday. (Les Stukenberg/The Daily Courier)

A "huge" party will overtake Gurley Street Saturday when the annual Oktoberfest heralds in the fall season, German style.

Proceeds from the fest, presented by Eagle Management and Events, will benefit the Prescott Sister City Zeitz, Germany, student exchange program and other sister city events.

A full afternoon of fun is in store for the Oktoberfest, which begins at noon and lasts until 7 p.m.

When guests first arrive, they will be entertained with "tons" of DJ'd German music, such as the Germans' own lively polka.

At 1:30 p.m., the Oktoberfest will officially kick off when Prescott City Councilman Chris Kuknyo taps a pin keg of Prescott Brewing Company's toasted coconut porter. He will be dressed for the occasion in lederhosen - leather pants - and shirt and jacket that he got when he visited an Oktoberfest in Munich, Germany, a couple of years ago.

Folks will have plenty of beer to taste, while they enjoy food and plenty of music during the event.

Large distributors - Hensley Beverage Company and Fred Nackard Wholesale Liquor company - will be on hand with their special brews, alongside other craft brewers, including Prescott Brewing, Granite Mountain, Black Hole, Osha, Sierra Nevada, Odell's and Barn Star, said Steve Gottlieb of Eagle Management. Trader Joe's will have its wine on the bill of fare.

A $20 bill will buy 10 sample tickets and a commemorative Prescott Oktoberfest pint glass. The first 100 through the door will get a Prescott sesquicentennial glass. Each sample of beer will be 4 to 5 ounces and wine, 1-1/2 to 2 ounces.

The fest will offer an abundance of food for the beer to wash down. Lone Star Café will have pulled pork for diners, and the Eagles organization is cooking up beer-boiled bratwurst, Papa John's is serving pretzels, Park Plaza Liquor and Deli will be selling cigars, and Safari Samosas will have a variety of filled pastries.

Los Guys and Sweet Nasty bands will strike up their instruments at 3 and 5 p.m., respectively.

The Sweet Nasty ensemble hasn't played together in a while, but its musicians will all be in Prescott to perform such songs from their repertoire as "Mojo Devil's Claw," "Life on Fire," and "I'm a Roman Candle," all in their jazz, rock 'n' roll and 'Southwestern edge' style.

The alliance between Zeitz and Prescott is a volunteer partnership to encourage tourism between citizens of both cities; to promote cultural exchanges in fields such as history, performing arts, music and sports; to develop exchange opportunities in education, economic development and business; and to expand contacts between people in public organizations, citizens' groups or associations, among other goals.

A primary focus is on student exchanges between Bradshaw Mountain High School, which wanted to participate in the program, and schools in Zeitz, said Margo Christensen, chair of the Zeitz Sister City Association. Two BMHS students have gone to Zeitz and 10 students from that city came to BMHS in October 2013. The next exchanges will take place in 2015, Christensen said.

Last year's Oktoberfest raised $4,100, she said. That money and 25 percent of the gross proceeds raised on Saturday will benefit the Zeitz Sister City Association and in turn will let the association write a check to BMHS to help finance some student travel expenses in the exchange program, Christensen said.