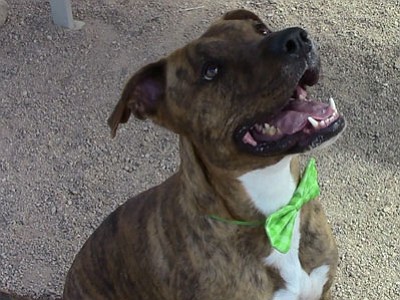 Nancy Scott/Courtesy photo<br> Katniss is a staff favorite. She is a 2 year old who loves to fetch, hike, camp, ride in the car and just relax at home with her loving family. She knows the basic commands “sit”, “stay”, “come” and “shake” and is learning more every day in the YHS Blue Ribbon program. Katniss is a friendly and happy girl who wants to please and will be very loyal. She prefers to be an only pet but gets along with other dogs with proper introductions. See her adoption video and profile on www.yavapaihumane.org/adopt. (Photo courtesy of Nancy Scott)

Several times each year I write articles on the harm that may occur to our pets when they are subjected to loud noises. The articles typically focus on legally sanctioned noises arising from city-sponsored activities like concerts, rodeos, fireworks and parades as well as natural noises like thunder. My intent is to equip pet owners with information that could help protect pets during these raucous events.

Today my intention is to call attention to an illegal activity from which it is almost impossible to protect our pets. In fact, this activity may seem like fun to some, but the consequences can be serious and even fatal - and at the very least, this activity shatters any reasonable expectation of our family's quiet enjoyment of home and hearth. I'm referring to the unsanctioned discharging of fireworks.

I was recently contacted by a Prescott resident who prefers to remain anonymous; so all the names in this story are changed. She shared a sad story involving her son-in-law, Rick and his beloved dog, Max. Rick had just returned home after being separated from Max, his six-year old pooch for over a year. He was out of state earning his degree in a medical field. As you can imagine, Rick's family was both proud of his academic accomplishment and overjoyed at having the family together again.

It was a time of celebration and Rick was reacquainting himself with family, friends and, of course, Max. He and Max had dearly missed each other and they were wasting no time catching up.

Rick and Max were hugging on each other on the front porch on one of Rick's first evenings home. The entire family was enjoying each other's company on a pleasant Prescott summer evening. Rick and Max were the center of the family's attention.

At a home nearby another celebration was underway - but their expression of joy was illegal and came with deadly consequences. They were celebrating with fireworks. Max had a deathly fear of loud sudden noises. In fact, the family had always been very careful to keep Max indoors during thunderstorms and other noisy occasions for fear he would bolt and run in a terror-stricken state.

There is no way to protect our pets from being frightened by illegally discharged fireworks (or for that matter, firearms). Although Max's breed is well known for being gentle, loyal, caring, and highly affectionate, it is also a high energy, athletic hunting dog that can run with great bursts of speed. At the sound of the unanticipated fireworks, that's exactly what Max did, he took off like a shot. The family chased after him - but he quickly disappeared from sight. Still the family frantically searched for him for hours.

Late that evening the family received a phone call from the Prescott Police Department. An officer called to inform Rick that his beloved Max had been found - struck and killed by a car on Highway 69.

This heartbreaking story ended in tears as this distraught woman asked if there shouldn't be a law protecting our pets from illegal fireworks in the City of Prescott. In fact, there is: Prescott City Code 5-14-2(A) cited above.