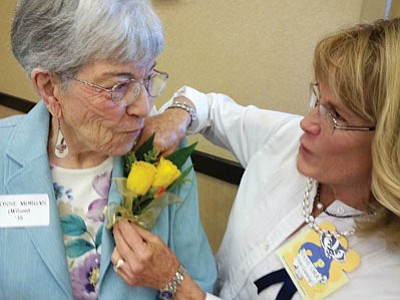 Jane Orr, PHS Class of 1963, pins a corsage on Class of 1938’s Yvonne Wilson Morgan on Thursday during a luncheon at the Prescott Resort. (Patrick Whitehurst/The Daily Courier)

"My mother-in-law did all the cooking and they had this nice little lunch," Orr said. "They decided it was something they'd like to do every year, so they kept inviting more and more people. Today we have more than 600 people in attendance."

In contrast to its humble beginnings, this year's luncheon was held at the Prescott Resort.

Prescott native Rich Oelze, who served as class president at Prescott High School in 1963, comes from a family of PHS graduates, including his brothers and his wife's parents and grandfather.

"There's such a history. It was quite an experience," Oelze said.

Martha Shipley, Class of 1952, said she has remained close with many of her fellow PHS graduates. "It's just great. Everybody looks forward to it and everybody's at their best," Shipley said. "It is a homecoming and it's growing every year."

Jeri Kenson Robson, Class of 1952, said she looks forward to seeing her friends each year. "It's such an opportunity to see your classmates and renew friendships. Our class has been particularly close over the years."

Besides inducting the Class of 1964 into the club, the group will also honor two former faculty members, James Burns and Charlie Phillips, and two members of the PHS Class of 1938, all aged 90 and above.