ADOT: Crashes severely back up I-17 once a week 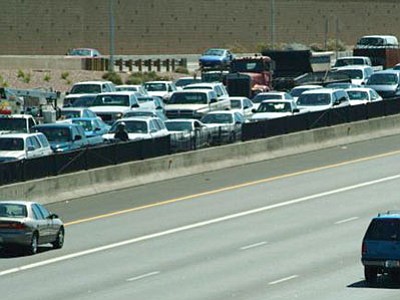 PRESCOTT - When a motorcycle and a semi-truck collided on Interstate 17 this past Friday evening, thousands of drivers were likely caught in the resulting traffic back-up. Happening as it did in the midst of the Friday afternoon/evening rush from Phoenix to northern Arizona, the crash's impacts were magnified, reportedly backing up northbound traffic for anywhere from six to 10 miles.

The incident was hardly unique, however. On an average of once a week, the Arizona Department of Transportation (ADOT) issues a similar traffic alert: One or more lanes of Interstate 17 have been closed because of a collision.

Oftentimes - especially when someone dies in the crashes - the news releases warn that the interstate closures could last for hours.

On Sept. 12, the ADOT news release come out at 5:29 p.m., stating that a fatal crash had closed the northbound lanes two miles north of Black Canyon City, and that drives should use alternate routes.

Chris Bridges, administrator of the Central Yavapai Metropolitan Planning Organization (CYMPO), was among those who came to an abrupt halt on his trip home to Prescott from a meeting in Casa Grande.

"I was personally stuck in the last one (on Sept. 12)," Bridges said. He called ADOT District Engineer Alvin Stump, and learned that the closure could last up to four hours.

Bridges said he was lucky, because he was able to turn around and take the alternate route through Wickenburg instead. Even so, he said, the closure turned what was usually a two-and-a-half-hour trip into a six-hour trip.

CYMPO members took on the issue this week, noting that the closures regularly cripple the main route between the Prescott area and Phoenix/Tucson.

"It just seems like it's becoming so common," said CYMPO Chairman Chris Kuknyo, whose son was also caught in the Friday afternoon closure.

Kuknyo, a member of the Prescott City Council, asked whether there were things ADOT could do to lessen the impacts of the crashes.

For instance, he suggested rerouting traffic from the affected side of the interstate onto the other side, and temporarily converting that side into two-way traffic.

But Stump said the volume of traffic on I-17 makes that option unworkable.

"There is just too much traffic (to allow for rerouting from one side of the interstate to the other)," Stump said.

A better option would be building climbing lanes on the switchbacks near Black Canyon City, he said, or building another lane that could be used for traffic in either direction, depending on the need.

But Stump pointed out that either of the options would require time and money. Meanwhile, he said, ADOT strives to get the word out to drivers as soon as possible about the crashes and need to find another route.

CYMPO board member Craig Brown, a Yavapai County Supervisor, maintained that ADOT's priority on writing accident reports causes the closures to last longer than necessary. "Why are we not opening that up sooner?" he asked.

Stump responded that when the crash results in a death, both lanes often must remain closed. "When we have a fatality, a lot of different things come into effect," Stump said. For example, he said, a coroner must get to the site to do an investigation. "If (the crash) encompassed both lanes, we're looking at three or four hours," he said.

The Sept. 12 crash, which resulted in a fatality, caused the complete closure of northbound I-17 for one hour, and the closure of one of the lanes for about three hours.

Solutions sought to I-17 issues
Reversible-lane project on I-17 planned by ADOT
Road work to add additional lanes, ease I-17 gridlock expected to be underway by 2021
Reversible lanes could reduce I-17 traffic (VIDEO)
Four-vehicle crash on I-17 causes major traffic backup