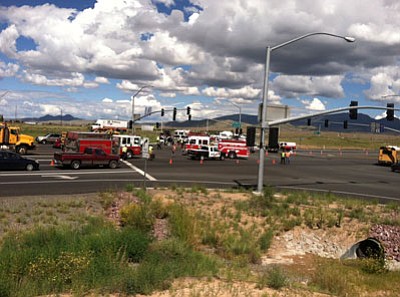 On Thursday, a three-car collision on Highway 89A near Fain Road left two people dead and three injured.

CYFD Capt. Rick Chase said four engines crews in total responded to the crash. One patient, a male believed to be in his 60s, was pronounced dead at the scene. A female passenger in his vehicle, also believed to be in her 60s, was transported by Native Air to the Flagstaff Medical Center for life-threatening injuries. She later died as a result of her injuries, according to Prescott Valley police.

Lifeline Ambulance transported a third patient, a male believed to be in his 70s, to the west campus of the Yavapai Regional Medical Center. He was later transported to John C. Lincoln Hospital in Phoenix in serious condition. Two others were also injured in the crash, but refused treatment at the scene, Chase said.

Prescott Valley Police Department spokesman Art Askew said the crash occurred when a small 2-door SUV stopped at a red light at the intersection of Highway 89A in the westbound lanes of Fain Road. A Chevy Impala, driving westbound on Fain Road, failed to stop and struck the SUV, pushing it into a third vehicle-also an SUV, which had stopped at the light on eastbound Highway 89A.

The cause of the crash remains under investigation, said Prescott Valley Police Department Cmdr. Art Askew.

"It is now known at this time if impairment was a factor in the crash. The names of all involved are being withheld pending the notification of next-of-kin," Askew said in a Thursday news release.