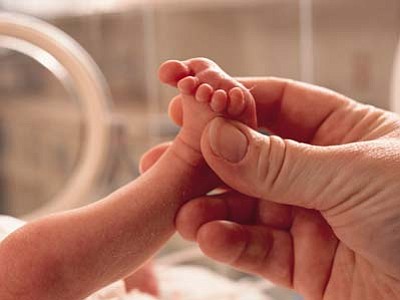 As any mother can attest, having newborns isn't easy. Yet, there is an expectation that mothers instantly fall in love with their newborns, that some overwhelming emotion comes out and the bond is instantaneous and everlasting. I call it the Fairy Tale Effect. According to a study released in 2013 (published by JAMA Psychology) 1 in 7 women suffer from post-partum depression. After surviving my own battle, I feel strongly that this is a topic that should be shared with all new mothers. I believe the reason this topic is not often discussed or shared is because we live in a society that is quick to judge and not support. In that type of environment, who would feel comfortable admitting that they wanted to run for the hills every time their child cried? This is my story of experiencing and surviving postpartum depression. While I can vividly recall my emotions, I do not have the slightest idea of when or how long this went on; my mom and husband have filled in many details for me.

Seeing the twins immediately after delivery was surreal, but I felt so proud to have carried such strong and healthy babies past full term (for twins full term is 36 weeks). I spent every moment in the hospital with one on either side of me and rarely used the hospital bassinets. I wondered at them, but looking back I did not feel that rush of love that some people talk about. Things were okay in the hospital because I was taken care of and had no decisions to make. The morning we left the hospital, it all began. Perhaps it was from being cooped in a hospital room for four days, lack of sleep or a being overwhelmed by everything, but I was shaky, on edge, and felt as though a dark shade and descended over the world.

Every day for the next week I got worse until eventually I sat, unresponsive on the couch with a screaming baby on my lap. My mom and T tried everything, a shower, a walk, sleep, but I couldn't walk or sleep and I couldn't find the strength to talk. I was so mired in this overwhelming feeling of doom. I spent hours plotting my escape, figuring out how I could run away. When one of the twins would cry my heart would race; I'd break out in a sweat and the urge to run would grow stronger.

One day T found me in the bedroom curled in a ball in the corner. At this point, both he and my mom were very worried. I had stopped talking and wasn't responding to the babies. Every time I looked at them I thought "I should love them, but I don't" and that made it all the harder. Finally T called our mid-wife who recommended I go back on the anti-depressants I was on a year prior. At this point my mom and Tim were desperate for help, so I took my first dose and not six hours later, suffered a major setback. My body, due to hormonal fluctuations from pregnancy, reacted differently to the medicine. I experienced shortness of breath, racing heartbeat, severe diarrhea and stomach cramps. I lay crying on the couch begging for someone to call 911; I was completely convinced that I was dying. A small dose of Benadryl reversed the effects and helped to get me some much needed sleep.

The next day, T took me to the doctor's office and I was officially diagnosed with postpartum depression and given a different, milder medication. My friends gathered together and came for a visit one afternoon and each told their own story of "baby blues"; they held me as I cried and vowed to check in every day. While it took several weeks for the medication to ease my anxiety and feeling of doom, the day we faced the facts and became proactive was the day I started coming back. It helped to talk and cry, to have that space to grieve, for I was also grieving the loss of carrying my babies, an experience I cherished.

In time, the major symptoms subsided, though I didn't really "fall in love" with my kids until about four or five months in and it took a good six to eight months for my body to stop responding with panic every time they cried. Now, the twins have turned twelve months old and I feel more myself than ever. Though I still have some symptoms (general anxiety), they're manageable. The important thing to me is that every mother be aware of the possibility of postpartum depression. Because I have suffered from anxiety and depression for most of my life, I was at greater risk and I knew that going in. My hope is that our society has the strength to support and understand women going through such a struggle.

For more information about the symptoms and treatment of postpartum depression and psychosis go to www.postpartumprogress.com.