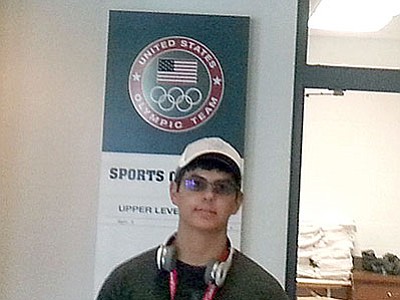 Prescott Valley has a junior Olympian and U.S. Olympic Team hopeful in its midst.

Joe Witty may be only 16, but he has been following a steady path of training and discipline that could, some day, lead him all the way to a gold medal.

Witty found his passion in life at an early age and the way he remembers it, he's been shooting a rifle since the age of 5. At age 11, he began shooting skeet.

According to Witty's father, their family got word about two years ago that Tucson would host the Junior Olympic Arizona Trials at its trap and skeet certified training center.

"Joe did well, shot a 97 out of 125, and took away the second-place medal. That qualified him to travel to Colorado Springs to the national skeet shooting competition at the Olympic Training Center," recalled Brian Witty, who also works as the Prescott Valley Parks and Recreation director.

Father and son explained that Lloyd Woodhouse, the seven-time Olympic coach, was there at the center offering hands-on advice to the young competitors before the competition.

The young Witty took away the silver in that event, a success that allowed him top consideration to come back in August to Colorado Springs and this time stay at the Olympic center for one week.

Not only did Witty train with Woodhouse, but he also trained with two-time skeet Olympian Connie Smotek, who set the women's record of 196 out of 200. Smotek is the head instructor at the camp.

Witty explained that while at the camp, he shot a perfect score of 25, meaning he shot a complete round of skeet consisting of 25 shots from eight different stations.

"After I shot the 25, my heart was going so fast... I set my gun down, walked to the next field where (Smotek) was coaching and just hugged her. Then I went back to my field and thanked Lloyd for all of his coaching," Witty said.

Despite the wind and rain coming off the surrounding mountains, Witty and the rest of his squad shot every day and endured the high level of training expected of every camper.

"Its not just about the shooting, there is physical training, mental preparation, and eye exercises," Witty's father explained.

The young Witty added that working on the focusing component became a huge part of the training as people would talk around and behind him and even throw objects at his path during the shoots.

Even something seemingly inconsequential as drinking plenty of water becomes integral to the success of the shooter. Witty said that when you start to dehydrate, the first things to go are the eyes.

"You have to be able to focus on the first bird - even when shooting doubles, you focus hard on that first bird. You get right on it and then get right on to the second one. You can't rush it, everything has to be smooth," he said.

Given his extensive training, Witty knows there is much work ahead of him as he endeavors to reach the Olympic trials.

The elder Witty said that it would be great to gain sponsorships for his son's competitions.

"It's an expensive sport. To see your child do what they are passionate about and succeed...we're still at the base of the mountain trying to find our way up to the top," he said.

The young Witty summed up his experiences thus far like a man years beyond his age.