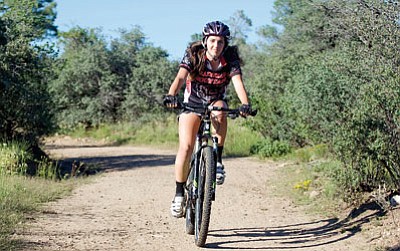 By Ed Wisneski
Originally Published: September 14, 2014 6:03 a.m.
Tweet
Before last fall, Hannah Madler had never competed in an organized race against cyclists her own age.The new Arizona High School Cycling League (AHSCL) provided her that opportunity."It was amazing to see that many kids out there with bikes who I didn't know about," says Hannah, a junior at Bradshaw Mountain High School (BMHS). "I used to enter adult races. Sometimes I was the only person in my age group."This morning Hannah and approximately 250 other cyclists representing 40 schools across the state will kick off AHSCL's second season at Pioneer Park. The races have been moved from last year's venue at White Spar Campground because the field of riders has grown by 50 percent. The 5.45-mile Pioneer Park loop includes portions of the Brownlow and Legacy trails. Varsity boys will complete four laps; varsity girls and junior varsity girls and boys, three; and sophomores and freshmen, two."It's a challenging course," says Hannah's mother Tracy, a chemistry teacher at BMHS who coaches the Bears' co-ed squad with assistant Emily Streeter. "There's hills [465-foot climb per lap], single track, and more double track that provides good opportunities to pass. The kids won't get too backed up." Local teams shine in prep mountain biking league's 2013 season finaleThe largest contingent of teams from one area in Arizona comes from the tri-cities. Last fall Prescott High finished second in the final standings behind Tucson Magnet High School. Chino Valley (7th), Bradshaw Mountain (8th), Northpoint Academy (9th), and Canyon View Prep (19th) also competed. Tri-City Prep in Prescott has joined the AHSCL this year, and two individual cyclists are representing BASIS Prescott, a new school for grades 5 to 10.AHSCL founding chair and executive director Mike Perry has expanded the 2014 series from four to five races, including two new locations - the Fort Valley Trail System in Flagstaff on Sept. 28 and the SARA Park Rodeo Grounds in Lake Havasu City on Oct. 26. Two other events are slated for the same locations as last year at McDowell Mountain Regional Park in Fountain Hills on Oct. 12 and White Tank Regional Park in Waddell on Nov. 9."Our first year was a great success," Perry says. "We had the second largest participation for a new high school league in the history of the NICA [National Interscholastic Cycling Association, the National Governing Body for grades 9-12 interscholastic biking in the U.S.]."This year will be a fun series for the kids and adults because of the different geography. They'll be biking amidst pine trees, in the high desert, and in a moonscape-like desert where nothing grows. We hope to remove the heat as a factor in the races as much as possible by scheduling northern locations early in the season and southern courses later on."5 teams from tri-city area compete in Arizona's new high school cycling leaguePerry has streamlined the logistics for each race, which requires as many as 80 volunteers. Each rider, for example, will be assigned one number plate to use for all five races. The AHSCL will test scoring cameras to record each rider crossing the finish line. As the league grows and more cyclists finish simultaneously, cameras may eventually be required.***Last season Hannah Madler finished third in the overall sophomore race standings behind champion Zoe Dunn of Chino Valley and Tristen Musselman from Northland Prep in Flagstaff. Hannah and Zoe first met the previous spring as relay teammates at the 24-hour Old Pueblo Race near Oracle in southern Arizona.They have remained friends, but it's tough for them to find time to ride together.Hannah has an academic and athletic schedule worthy of Wonder Woman.She maintains a 4.0 grade point average, tied for first in her class. Her course load includes four advanced placement (AP) classes in chemistry, psychology, English, and statistics plus honors pre-calculus. She also plays for the Blackhawks select soccer team that competes in a Phoenix league on Saturdays from September through November.Twice last fall, Hannah had to juggle select soccer and mountain biking in one weekend."Her dad and I split the driving," says Tracy, "because I had to supervise the team's pre-race preparation on Saturday."In the winter and spring, Hannah competes for the BMHS soccer and track & field teams. She has qualified for the state championships the past two seasons in the 800-meter run and 4x800 relay as well as the 4x100 as a freshman. Last spring she missed qualifying for the 300-meter hurdles by one second.Hannah's Thursdays this fall are jammed to the extreme.Her first class, statistics, begins at 7:45 a.m. Her last, chemistry, ends at 2:15 p.m. She rushes home to cram in homework before heading to Pioneer Park for mountain biking practice from 4:30-6:30. After that, she catches a short "break" because she can walk to nearby Kuebler Field for Blackhawks' practice from 7-8:30. After dinner, Hannah settles in for more homework until midnight. Each AP class can require as much as one to two hours of homework per day."Hannah is driven," her mother understates. "She's most passionate about soccer. She hopes to play in college."Some of Hannah's motivation comes from competing against friends with similar crazy schedules."The hardest part is finding down time for myself and to hang out with friends," Hannah says. "I have to be efficient and manage my time well. At night I know when it's time to stop. If I'm not rested enough, I won't be able to learn and do sports."And continue to thrive in both.
Contact
Sign up for Courier e-News Alerts
Most Read
7 days
30 days