Changing the world thru changing your clothing 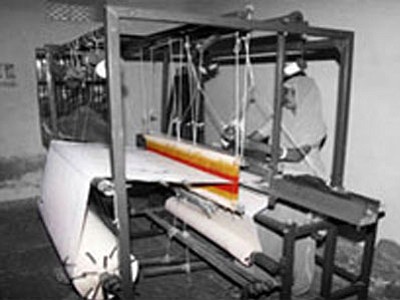 We all know that you can change the way people look at you by changing your clothing choices,  but can you change the world with clothing? Mahatma Gandhi thought that Khadi cloth could. In the 1920s, almost a century ago, Khadi (homespun cloth), which had already existed for centuries, was promoted as a peaceful weapon in the freedom movement of India.

Khadi, hand-spun and hand-woven cloth from India, is usually made out of cotton but may also include silk or wool. It is spun into yarn on a spinning wheel called a charkha. Gandhi advocated that khadi be worn by all Indians instead of British-made textiles. Gandhi encouraged all men and women, of all classes, to spend time each day spinning khadi in support of the independence movement. He even developed a portable spinning wheel that was small enough to be carried by and used by all.

As such, Khadi is not just a cloth, it is a whole movement started by Mahatma Gandhi. At the time, British merchants would buy cotton in India, which was shipped to Britain and made into garments, which were shipped back to India to be sold at high prices. Gandhi wanted the Indian people to be self reliant and to boycott all foreign-made goods, thus improving India's economy. Khadi was an integral part and icon of the movement.

The Indian independence movement and the developing nationalism was an economic strategy aimed at removing the British Empire from power and improving economic conditions in India by following the principles of self-sufficiency. Strategies of the movement involved boycotting British products and the revival of domestic products and production processes.

Not only did the followers boycott British products, Western clothes were thrown onto bonfires. The people gathered and burnt their imported clothes. (Similar to the burning of Disco albums in the 80s, but with more purpose.) They also picketed the shops selling foreign goods and resolved to use things only made locally.

The movement continues today, with the post-independence movement as an answer to past imperialistic policies. After two centuries of colonial oppression, India's national policies are aimed at enabling a self-sufficiency. Khadi clothing is still made today, by people who draw inspiration from Gandhi, who was the chief creator, chief promoter and chief marketer of this great freedom fabric. At modern day companies like Divine Ray, fabrics are produced that are hand spun, hand woven and hand dyed. This entire process uses no electricity and is very eco-friendly.

On my latest trip to the Las Vegas fashion trade shows, I met with Viral Gandhi, co-founder of Divine Ray. When asked if he has any relationship to Mahatma Gandhi, Viral jokes that he is only related in spirit and is trying to live by and up to the great man's teachings. Divine Ray's booth at the show featured a charkha, and I got to take off my shoes, sit on the floor and spin some yarn. Viral says that their goal is not just to make ecologically good products, but also to help people by providing fair wages and donating 10 percent of profits to charities.

Wearing your khadi clothing is not just employing nonviolent civil disobedience.  Besides being socially conscious, it is a lightweight fabric, which keeps you cool in summer and warm in winter. You actually feel good and look good, while you are feeling good about yourself.

"A small body of determined spirits fired by an unquenchable faith in their mission can alter the course of history." - Mahatma Gandhi

Changing the world thru changing your clothing
Travel: facets of India
Letter: Obama should heed the words of Gandhi
Column: Airport pat-downs lead to boost in job seekers
Column: Glenn Beck, Mahatma Gandhi, and you