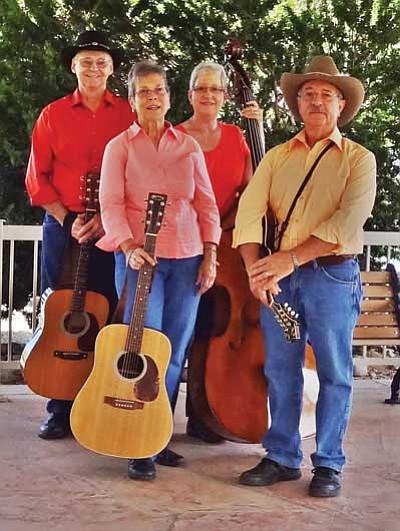 Courtesy photo<br> The Cinder Mountain Bluegrass Band will perform in the Prescott Opry show Thursday night at the Elks Theatre.

If the audience has as great a time listening as the Cinder Mountain Bluegrass Band has playing, then a good time is in store Thursday when the Prescott Opry takes the stage at the Elks Theatre and Performing Arts Center.

The band's forte is bluegrass, which is a challenge to perform, said John Bragg of Cinder Mountain. But, he said, "It's interesting music, because there is so much variation."

And, the four in the band - Bragg and his wife, Gayle, and John Harris and his wife Karen - are enjoying performing, meeting people in the "bluegrass world," and the audiences the band entertains, Bragg said.

Both Bragg and Harris had played in other bands until they decided to team up and form the Cinder Mountain Bluegrass Band.

"We really consider ourselves a family band even though we are two families," Bragg said. All four in the ensemble are retired.

"Now, we are gainfully unemployed," Bragg said. "It's a second childhood."

The show begins at 7 p.m. Tickets are $17, with senior and student discounts available. Get tickets by calling the Elks box office at 777-1370 or going online to www.prescottelkstheater.com.

Cinder Mountain will play two sets, with songs such as "Bluebirds Are Singing," "River of Sorrow," "Prairie Winds," "Precious Memories," "Muddy Water," and "Memories of a Mountain Home." Cinder Mountain tunes are the "old standards," Bragg said, but there are different ways to play them. "We are constantly improvising while we are performing." It's the kind of music that fits us. We enjoy the music. It's the kind of thing we listen to individually."

Bragg said he used to pick at his mandolin but put it away for a time during his working years. He missed it, he said, so he took it off a shelf about 10 years ago and "has been going gangbusters ever since" he said.

Harris has been playing his instrument across the spectrum of genres - country western, rock and roll, folk and bluegrass, since he was a child, Bragg said.

As Cinder Mountain performs its bluegrass favorites, the audience can expect a lot of harmonizing.

"We pride ourselves on our harmonies," Bragg said. "Hopefully, the audience will have as much fun as we will."

The evening of music will also include a return appearance of Denise Hardy, who will sing melodies of female country stars; J.L. Pike and his rockabilly tunes; and bluegrass gospel band, Brush Arbor Revival.