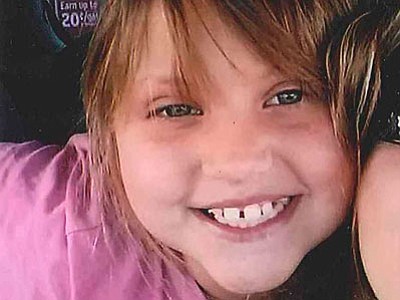 This undated file photo provided by the Bullhead City Police Department shows Isabella “Bella” Grogan-Cannella, an 8-year-old Bullhead City girl whose body was found in a shallow grave near her home Wednesday. (The Associated Press)

BULLHEAD CITY (AP) - An 8-year-old girl reported missing from her Arizona home was strangled, authorities said Friday as they continued to investigate the case.

The Mohave County medical examiner released the manner of death for Isabella "Bella" Grogan-Cannella on Friday. The cause of death was asphyxiation.

Police found Isabella's body in a shallow grave near her Bullhead City home Wednesday, a day after her family reported her missing.

Isabella was discovered wearing the same green, ruffled, sparkly tank top she had on when she was last seen. However, authorities said she didn't have any clothing on her lower half and they are looking into whether she was the victim of sexual assault.

Justin Rector, a 26-year-old Bullhead City man with a lengthy criminal history, was charged with kidnapping and first-degree murder in her death. Authorities described him as a family friend who was staying at Isabella's home at the time she disappeared. He is being held without bond.

Meanwhile, teachers and administrators at the schools Isabella attended remembered her as friendly, loving, obedient, beautiful and inquisitive.

"I think anyone who has children or who works with children is devastated by this tragedy," Cochran told the newspaper in Bullhead City, which is on the Arizona-Nevada border about 100 miles southeast of Las Vegas.

Police said they aren't ruling out additional charges or arrests in their investigation into Isabella's disappearance and death.

Folster called 911 around 1:30 a.m. PDT Tuesday to report Isabella missing. In the recording released Friday, he said Grogan was distraught over her daughter's disappearance and that he had "not the slightest clue" where she might be.