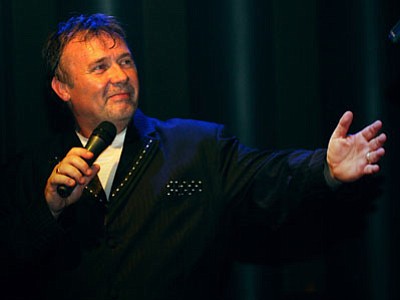 Works by Ralph Vaughan Williams and Ludwig van Beethoven will be features of the Yavapai College Master Chorale in a performance at 3 p.m. Sunday in the college's Performing Arts Center.

Tickets are available online at ycpac.com, in person at the Yavapai College Performing Arts Center box office or by calling the box office at 776-2000.

The concert will open with Williams' "Serenade to Music." This work was written in 1938 and dedicated to Sir Henry J. Wood, on the occasion of his jubilee, marking Wood's 50 years as a professional conductor. The text comes from Act V of Shakespeare's "The Merchant of Venice."

Beethoven's "Choral Fantasia" is next on the program. To listeners familiar with the "Ninth Symphony" this music will remind them of the final movement of that great, passionate symphony. The words come from Schiller's "Ode to Joy."

The final piece for the afternoon will be Williams' "Dona Nobis Pacem," a powerful statement of the horrors of war. He enlisted in the Royal Army Medical Corps in 1915, determined to go to the front, and was assigned ambulance duties. As the world witnessed the deaths of 1,265,000 British, French and German soldiers, he was on the front lines.

The piece opens with the soprano soloist and chorus singing the heartrending "Dona Nobis Pacem" - give peace.

The following movements are based on the poetry of American Walt Whitman, who was a nurse in the American Civil War, emphasizing the horrors of war.

Part V, "Angel of Death," sung by Philip Dixon, is a lament of the death angel's presence still in the world. The final statement "Glory to God" urging communal action for peace, sung by the chorus and Linda Fine reiterates the plea for peace, ending on a sad question mark - that 100 years later, there still is no peace in the world.

Surprises are in store for the audience when Piano Man Terry Davies brings his show featuring the music of Elton John and Billy Joel to the Elks Theatre and Performing Art Center on Saturday evening.

This will be the third Piano Man tribute to the two legendary musicians in Prescott, and Davies didn't want to give away all the of the show's features in its return to the Elks stage. In addition to the familiar John and Joel melodies, he and his band have performed before, the Piano Man show will roll out some new dimensions to the tribute's customary entertainment, he said.

The TAD Management production begins at 7 p.m. Tickets are $22/$25 and are available at the Elks box office by calling 777-1370 or going to the theater's website, www.prescottelkstheater.com. People can also pick up tickets at the door one hour before show time on Saturday.

The audience will be sure to hear such hits at "Candle in the Wind," "a new arrangement of "Just the Way You Are," and a unique version of "It's Still Rock and Roll to Me," Davies said.

Davies said he and his family "love the music of Billy Joel," and because Davies sounds a lot like John and the two icons have toured together, the TAD performance naturally progressed to a show paying tribute to both superstars.

"It will be a great bight," Davies said of Saturday's concert.

Davies said TAD shows have attracted a lot of fans in Prescott and that he is "excited to come back to a place we consider home."

TAD has booked four shows at the Elks in November that are part of the "November to Remember" series.