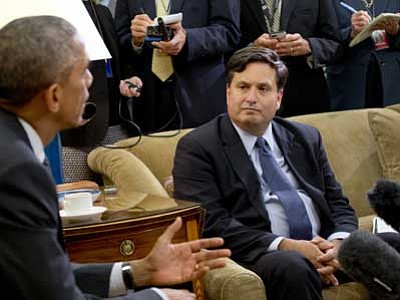 Reporters take notes as Ebola coordinator Ron Klain listens to President Barack Obama speak to the media about the government's Ebola response in the Oval Office of the White House in Washington. (AP Photo/Jacquelyn Martin, File)

The hysteria in the United States surrounding Ebola is far worse than the reach of the disease. There, we said it. That is especially the case when one considers the excessive quarantines some have enacted, based on fears and not science.

The possibility of an Ebola epidemic should be taken seriously, without a doubt. The Center for Disease Control and health care leaders across the country need to work hand-in-hand to make sure the best, most responsible measures are taken to treat those who are infected and to protect the further spread of this deadly disease.

Clearly the CDC and some hospitals have made missteps early in this situation. What needs to happen now is continued diligence in work, preparation and education.

Further, politicians need to stop playing politics over this. Blaming the Obama administration or Republican leaders in Congress is the one of the worst moves to make with this scenario. It dulls the argument.

Also, some in the media need to stop talking about every Ebola "scare" that comes along. We've heard about some too in the greater Prescott area and northern Arizona. We call and check them out, but it's more smoke there than fire at this point.

Personal and professional responsibility seems to be in short supply. The fear is understandable. It's a deadly disease that until recently was never a threat like this and people are worried. That's why it should be the role of the government, health care professionals and the media to educate people and keep them informed of facts and realities, not distortions, speculation and rumors.

As for the appointment of Ron Klain, former chief of staff to Vice President Joe Biden and Al Gore, to be the Obama administration's "Ebola czar," Klain is a political operative and not a medical professional.

That said, we have a bigger issue: that the "czar" position exists. Even the use of the word "czar" ought to give conscientious citizens pause. As of 2012 (the most recent year for which data is available), the Office of Personnel Management reported that the executive branch of the federal government had nearly 2.7 million civilian employees. If those workers and their leaders are consistently unable to meet the most pressing challenges facing the nation, then creating supplementary positions is, at best, an exercise in triage.

A "czar" can't stop Ebola. Only through education and precautions can this hysteria or threat be put down.