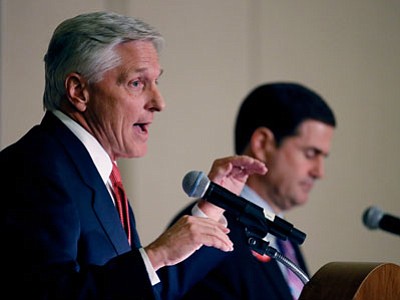 Fred DuVal, left, lashed out at his Republican opponent in the Arizona governor's race over his education funding plans Friday. DuVal called Republican Doug Ducey "the most anti-public education candidate for governor in my lifetime."

PHOENIX - Democrat Fred DuVal lashed out at his Republican opponent in the Arizona governor's race over his education funding plans Friday, upping his rhetoric in the campaign as the race nears its final week.

DuVal called Republican Doug Ducey "the most anti-public education candidate for governor in my lifetime," and said Ducey's plans to cut income taxes will end up decimating school funding.

"He wants to do giant tax giveaways to the rich that would cause the largest funding cuts to education in our state - it is simple math," Duval said. "The fact that he won't admit that his plan doesn't add up shows that Doug Ducey isn't honest enough to be our governor."

The aggressive tone from DuVal comes two weeks after voters began casting early ballots and just 12 days before the general election and stands in stark contrast to the civil tone he took in five debates with Ducey. DuVal spoke at a news conference at the Phoenix headquarters of the Arizona Education Association and was joined by teachers who support his call to stop funding cuts.

"I think there's probably a slight exaggeration that Doug's the single-most antagonistic to public education in the history of his life," Jones said. "But I also think they have difference of opinion on how to fund things."

In a statement, Ducey's campaign called the attack "both dishonest and false."

"In just over one week, we are confident Arizona voters will elect Doug Ducey to lead on both education and the economy, and as governor, he will make certain there are no winners and losers in Arizona's schools."

DuVal has made education funding a centerpiece of his campaigning, vowing not to cut another penny from K-12 schools and to stop fighting a court order that inflation funding be restored.

The courts have ordered Arizona to pay an additional $1.6 billion to schools over the coming five years and may order $1.3 billion in back payments. That order came in a lawsuit won by schools over the Legislature's failure to fund voter-mandated yearly inflation increases, and is being appealed.

In addition, the state is facing more than a billion dollars in deficits in the coming two years, a looming fiscal crisis the next governor will have to deal with as soon as he takes office in January.

Both candidates have given general ideas about how to handle the deficit, but dodge when pressed for specifics, as DuVal did Friday when asked by reporters to say what he would cut if schools got full funding.

"You asked the right question, which is OK, fine, you're not going to cut any more in education, but there's a whole lot more to the budget than just that, and you know that," Jones said. "You got to tell me where you're going to get the money from, and I think that's what Doug's been focused on."