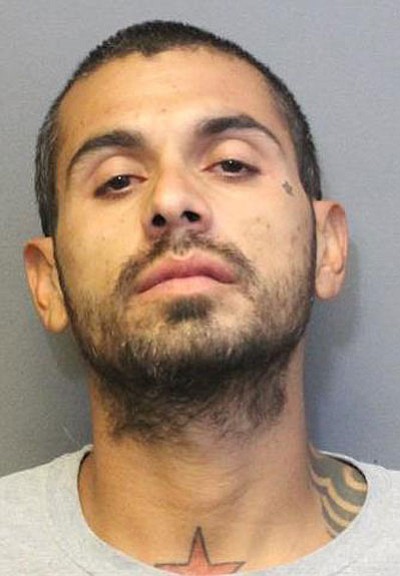 A Prescott Valley man has been arrested nearly two years after $20,000 worth of pills were stolen from a Mayer pharmacy.

Accused of sawing through a roof to burglarize the Spring Valley Pharmacy, Daniel Navarro, 34, of Prescott Valley, has been charged with burglary, theft and possession of a narcotic drug.

On Oct. 8, Navarro was arrested for a probation violation and interviewed about the pharmacy burglary. Enhancement of security footage showed a distinctive tattoo on the suspect's left hand that was matched to a photo of a tattoo on Navarro.

While in detention, according to Dwight D'Evelyn of the Yavapai County Sheriff's Office, Navarro initially denied involvement until confronted with the video evidence at which time he confessed.

"Deputies determined a male suspect cut an opening in the roof using a power saw and dropped himself through the ceiling to access the pharmacy," D'Evelyn said. "Nearly 1,400 pills were taken with an estimated street value exceeding $20,000."

Surveillance video showed the suspect was wearing a mask and black clothing and forcibly entered a locked cabinet.

D'Evelyn said that detectives later received tips which led them to Navarro as a suspect.

"He acknowledged an addiction to prescription drugs."