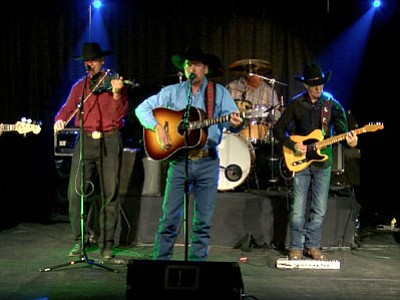 George Strait fans will have the opportunity to hear the hits of the country music legend in a tribute concert Saturday at the Elks Theatre and Performing Arts Center.

Strait is the king in this genre in the mind of Phoenix singer and guitarist John Eric.

"He has always been my favorite," he said. "I love traditional country music and he's never strayed from that."

And, when people told him he looked like Strait and sounded like him, Eric decided to put together "The Troubadour Experience - George Strait Experience" in 2013.

He hand-picked a band, and the ensemble performs in the Valley area and beyond.

Saturday's show starts at 7 p.m. Tickets are $22/$25 and are available at the Elks box office by calling 777-1370 or going online to www.elkstheater.com. Tickets will also be on sale at the door one hour before the show begins.

Eric has been a professional msician since he started his first band when he was 26 years old. Over the couple of decades that followed, he performed in bands that played in bars, casinos and at corporate functions.

Eric said he "paid attention to detail," when he chose band members by considering their stage experience and professionalism.

Saturday's audience can expect to hear such Strait hits as "All My Ex's Live in Texas," "Amarillo by Morning," "Check Yes or No" and more.

Knowing that Strait is winding down his touring career, Eric said he wants to keep Strait's music alive.

"The audience can expect an authentic reproduction of a George Strait show," he said.