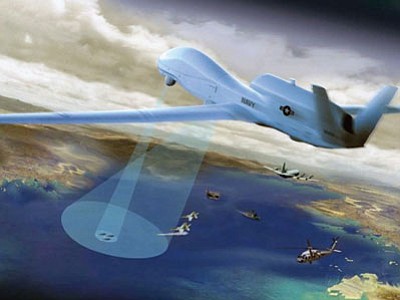 PRESCOTT - When it comes to unmanned aerial vehicles (UAV), often referred to as drones, their impact on aviation history is just beginning to take flight.

But don't let retired U.S. Air Force Colonel Geoffrey "Jeff" Parker hear them called "unmanned." They are manned, he says, only the pilots stay on the ground when sending the craft into the skies for combat and intelligence missions.

"When you ask the Air Force or the Navy, or a personnel officer, about the system being unmanned, they will challenge you a little bit," Parker said.

Unlike cockpit pilots, Global Hawk pilots use a mouse and keyboard.

Parker said Global Hawks UAVs, designed by Northrop Grumman, is currently land-based only and cannot take off from a Navy vessel. The systems operate on "near" real time transmissions from the pilots on the ground for combat missions and are capable of taking high-resolution images of large geographic areas for intelligence gathering duties. Originally, UAVs were part of a mission to create a vehicle that could fly for 48 hours non-stop, Parker said.

The Global Hawk and the U2 aircraft have jockeyed for position over the last decade, he added, with one getting funded over the other since 2006. The Global Hawk UAV program, he said, retired the U2 program this year.

For instance, the system does work in bad weather, he said.

"It is true it has some trouble with icing," he added.

Another misconception, he added, is that it takes weeks to plan a Global Hawk mission, but the system is also capable of flying off the mission parameters, he said.

The systems are also protected from hacking, or jamming, while the UAVs are in flight.

"All the links on the aircraft are encrypted. I'm pretty confident it's secure in that way," Parker said.