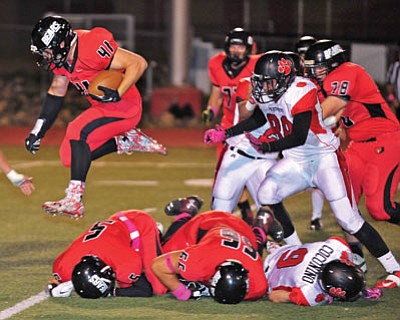 After crushing Coconino Friday night at home, the Bradshaw Mountain High football team is now tied for the Division 3, Section 4 lead with rival Prescott just past the midway point of the 2014 season.

Two weeks from now in Prescott Valley, the Bears and Badgers will lock horns - quite possibly for all of the section's marbles.

Tailback Colton Audsley unofficially rushed for 135 yards and scored four touchdowns, including one on a long kickoff return, and bruising fullback Shane Sorrells had 12 carries for 121 yards, leading Bradshaw to a convincing 68-0 victory over the Panthers.

Defending D-3, Section 4 champion Bradshaw (4-2 overall) is now knotted with the Badgers for first in the section, as they both own identical 3-0 records.

With 9 minutes left in regulation on Friday at Pavlich Field, Bradshaw's Abraham Hernandez scored his second TD of the fourth quarter to push the hosts' lead to 68-0 and clinch their first shutout victory of the season.

Coconino (2-4, 2-1), which is in rebuilding mode this fall, struggled in the first half against BMHS, consistently giving the Bears decent field position early on, and it snowballed from there.

Early in the second half, Sorrells scored on a 73-yard run that made it 40-0. Bradshaw cruised to a 48-0 advantage later in the third on a 93-yard kickoff return for TD from Audsley. Backup tailback Brandon Comeno later reached the end zone to extend the Bears' edge to 54-0 by the end of the third.

Sorrells and Audsley were a 1-2 punch for Bradshaw through three quarters.

By the end of the first quarter, Bradshaw led Coconino, 12-0, on two Audsley TDs.

Coconino tried to trim the Bears' edge to 12-3 with a 39-yard field goal from Ray Crank, but it missed when it hit the crossbar with 11:56 left in the second quarter. On the ensuing drive, Audsley ran 80 yards for his third TD to put Bradshaw ahead 19-0.

Bears QB Jarett Cain had a 16-yard gain to get the Bears into the red zone after the pick. With 9:52 left in the first half, Sorrells scored from 2 yards out to push the Bears lead to 26-0.

Bradshaw sophomore Gunner Bunderick shared the signal-calling duties with Cain in the first half. With 2:55 remaining until halftime, Bundrick connected with David Otero on a 21-yard TD pass for a 33-0 edge.

While the offense was running wild, the Bears got a huge boost defensively with Angel Gonzales and Evan Wood both returning to the starting lineup after suffering injuries versus Scottsdale Saguaro in Week 3.

Next week, the Bears travel to NAU's Walkup Skydome to face Flagstaff High. Kickoff is at 7:30 p.m. on the Lumberjacks' field turf.