Folk Music Fest is this weekend 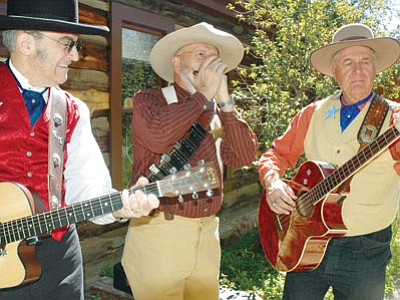 One of the longest-running musical events in Prescott, the Sharlot Hall Museum's Folk Music Festival, now in its 36th year, takes place this Saturday and Sunday.

More than 200 folk musicians from throughout Arizona and the Southwest will entertain from 10 a.m. to 5 p.m. on Saturday and 10 a.m. to 4 p.m. on Sunday in 90 different performances around the museum grounds.

Visitors are welcome to bring their instruments and jam with the performers throughout both days.

Admission is $8 per person and $5 for museum members. Youths 15 and younger will get in for free if accompanied by an adult.

The festival will feature such performers as Tom Munch, a singer/songwriter from southern Colorado who was popular at last year's event. Munch plays acoustic guitar and will perform at 2 p.m. Saturday in the museum's theater.

Generation, Prescott's youth string band, will perform at noon Sunday in the amphitheater.

Phoenix-based Tom Tuerff will be singing his humorous and unusual songs Saturday afternoon in the West Gallery. Tuerff has been featured on radio stations around the country, including the "Dr. Demento Show" and NPR's "Midnight Special."

Tuerff will also be involved in one of 24 workshops that will take place throughout the weekend and open to visitors, performers and jamming attendees. Tuerff's session will be on humorous and unusual songs, which is one of several that allow visitors to go one-on-one with the

performers about style, substance and marketing in the music business.

Greg LaCrosse is also on the festival's playbill and will be performing ballads, railroad and Old West songs. He will entertain the audience with his Irish ditties at 2 p.m. Sunday in the amphitheater.

A special tribute to Joe Bethancourt, a local musician and longtime folk festival performer who recently died, will be 5 p.m. Saturday in the amphitheater.