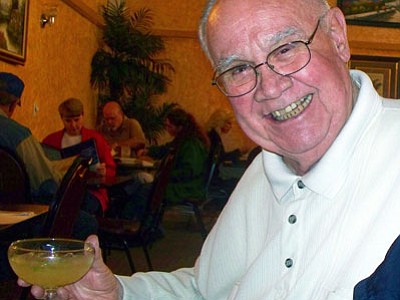 Born Feb. 6, 1927, in Bettendorf, Iowa, Dan resided in Davenport, Iowa, where he graduated from St. Ambrose University with a B.S. in business.

He met and married Mary Lou Collins in 1951. Together, they raised seven children.

Dan worked for Kellogg's Sales Company for more than 30 years, until he retired in Huntington Beach, Calif., at the age of 55. His career with Kellogg's made it necessary for their family to move from Iowa to Minnesota, Illinois, Georgia, Utah and California.

Dan and Mary Lou fell in love with Prescott during one of their vacations and decided to spend their retirement years here. Dan enjoyed golfing, but his main love was his wife and family.

He is survived by his wife Mary Lou; his children, Pamela, Mike, Dan, Tim and Teresa; four grandchildren; and three great-grandchildren.

A funeral Mass celebrating his life will be at 11 a.m., Friday, Oct. 3, 2014, at Sacred Heart Catholic Church in Prescott, Ariz.