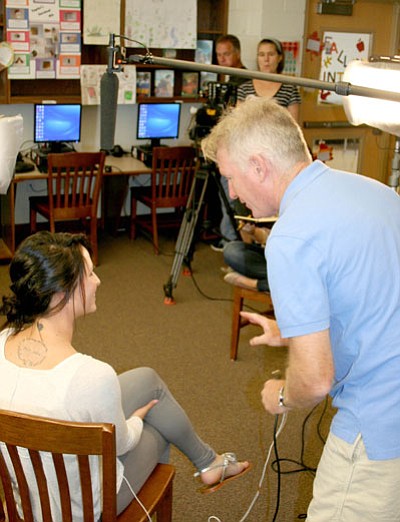 Steve Filmer, right, sound production with the Edutopia film crew, hooks up the microphone to Humboldt Elementary School parent, Felicia Excell, in preparation for an interview. Setting up the camera in the background are Brad White, director of photography, and Julie Konop, production editor.<br> Trib Photo/Sue Tone

"Super friendly" and "unobtrusive" described the Edutopia film crew at Humboldt Elementary School this past week.

The crew shot photographs and filmed students, parents, teachers and administrators for an Edutopia "Schools that Work" production through the George Lucas Educational Foundation.

Excell said she has frequent discussions about Brayden's reading skills with the Title I teacher, Maureen Holt, who lets her know what he needs to work on and gives her tips on how to help at home.

"I make sure he does his homework. If there is no homework, I call his (classroom) teacher, Sally Mason, to find out if he forgot or if there was none given," Excell said, adding that she appreciates Mason's prompt return calls.

In one month, Brayden's reading has improved dramatically, she said, and he has already exceeded most of his scores.

Excell is particularly pleased with the teachers and school because, as a member of the U.S. Army Reserves, she was deployed to Afghanistan this past year for 10 months, missing most of Brayden's kindergarten year.

Edutopia scouted the Humboldt Elementary this past May, and based on several exceptional programs, determined it qualified as a contender for Schools that Work.

Schools that Work is a series that highlights practices and case studies from K-12 schools that improve the way students learn. Uvila said she proposed a variety of things the district felt were new, different and easily adaptable by other schools.

"They explained that they were creating a bouquet of high achieving schools. Humboldt Elementary School is one flower in the bouquet. So they are helping us create the best possible flower," Uvila said.

Edutopia focused on three factors occurring at HES: family and student engagement, its Title I reading program, and iChoose.

iChoose takes place three days a week during the last 25 minutes of the day, Uvila said. Based on student assessments, if a child needs extra help in math, for instance, that student participates in the iChoose math intervention class. If they don't need the help, they can choose a class on one of several different topics. However, by the third iChoose day in a week, if the student has mastered the math skill, he or she can choose to attend another class.

Former principal Cole Young said having Edutopia select HES was "an affirmation of what we've done over the last three years." The selection of Schools that Work already online are available to teachers and districts come from all over the country.

Field Producer Megan Garner said the filming Thursday went very well. "We got some great interactions and enjoyed our time seeing what happens inside the classrooms," she said, adding that she can't say just yet when the finished video will be available online, but at least a few months before post-production on Humboldt's film begins.