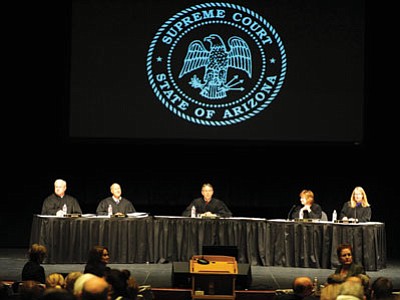 There were no surprise witnesses, no lawyers taking witty shots, and not even a single cry of "This is outrageous, I object!"

The Arizona Supreme Court came to Yavapai College on Tuesday. Though the court met at the school's performing arts center, this was no show - this was the real deal, with the justices hearing oral arguments on an actual case.

As Justice Rebecca White Berch said during a question-and-answer session that followed the oral arguments, "By the time cases get to us, usually all the sex and violence and drama is stripped out of it."

Indeed, though this case might have been left those hungry for courtroom theatrics empty, it was a choice meal for those with an appetite for philosophical puzzles and linguistic dissections.

Tony Deng has been incarcerated for two years on allegations of the sexual abuse of his stepdaughter. He is awaiting the Arizona Supreme Court ruling on whether his attorneys may question the mother of his alleged victim.

Arguments for and against revolved around interpretations of Arizona law 13-4403 (C), which declares, "If the victim is a minor or vulnerable adult, the victim's parent, child or other immediate family member may exercise all of the victim's rights on behalf of the victim."

After Maricopa County Superior Court ruled in Deng's favor, an appeal was filed by the victim's mother and the prosecution. The Court of Appeals later concluded, according to a Supreme Court brief introducing the matter, the law "does not vest the parent with the indefinite status of victim and that the legal authority to exercise victims' rights exists only when the victim is a minor."

Representatives of the alleged victim, her mother and the prosecution went to the Superior Court, which agreed to hear their arguments. Attorneys on both sides submitted written briefs outlining their arguments, then came to Yavapai College prepared to orally defend their views.

Before an auditorium filled with middle-school, high-school and college students, attorney Colleen Clase of Arizona Voice for Crime Victims first made a plea for the court to allow the victim's mother to refuse an interview. Vicki Lopez of Mesa's Nolan Law Firm then argued on Deng's behalf that the mother be compelled to talk.

Both attorneys had their 20-minute presentations frequently interrupted by the five Supreme Court justices, who took turns peppering them with questions, most of them variations on the crucial question that Chief Justice Scott Bales posed: "Does the victim's parent's right last only while the victim is a minor?"

Clase repeatedly made the argument that the right lasts after the minor becomes an adult. She emphasized that the justices should "understand the concept, which is to protect victims."

Arguing the contrary, Lopez insisted it would be "ludicrous and absurd" to extend the right indefinitely. "Our contention is it's a temporary right," she summarized.

After the oral arguments, the session became informal, with Bales inviting those in the audience to ask general questions; he noted specific questions about the case would not be answered.

Sydney Skinner, a senior at Prescott Valley's Bradshaw Mountain High School, asked what it was like to be part of Arizona's highest court, as compared to judge of a lower court. Bales good-naturedly assigned the question to Justice Robert M. Brutinel, who was enjoying a homecoming of sorts.

Before taking the biggest gavel in the state in 2011, Brutinel launched his law career in Prescott as an attorney, then was a judge with the Yavapai County Superior Court juvenile (1996-2004) and adult (2004-2010) divisions.

Brutinel said that, when he first considered moving up to the Supreme Court, he asked an older justice for advice. "He said, 'Judging is judging.'

"He was dead wrong," Brutinel said, with a smile.

He sketched the work life of a top justice as isolated: "It's a very quiet place to work. People don't walk down the hall to talk to you.

"I miss the people."

Emily Hoff, a 19-year-old student at Yavapai College, asked what the five justices - John Pelander and Ann A. Scott Trimmer, in addition to the three previously named - want to hear in an oral argument.

"We're not here to see who did a better job," Bales added. "We're here to rule on the law."