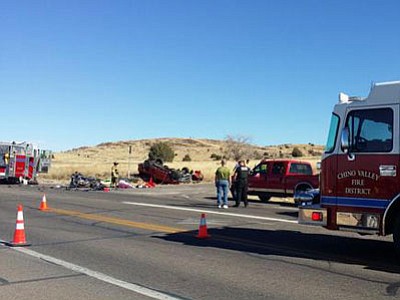 Two people were killed in a motor vehicle collision involving a motorcycle and pickup Saturday at the intersection of state Highway 89 and Sweet Valley Road in Paulden. (Town of Chino Valley/Courtesy photo)

PAULDEN - Two people were killed and two were injured in the collision of a motorcycle and a pickup truck at the intersection of Highway 89 and Sweet Valley Road Saturday morning.

The motorcycle was headed north when it hit the truck just after 11 a.m.

The truck crossed the highway from the west to the east on Sweet Valley, and, as it did, the motorcycle struck it, causing the truck to roll over, according to a Department of Public Safety report.

The motorcyclist, Nicholas R. Yekin, 53, from Goodyear, was killed, as was Austin J. Faulkner, 18, of Paulden, a passenger in the truck, the DPS report said.

Yekin was not wearing a helmet and only the passenger who was killed in the truck was wearing a seatbelt at the time of the crash, the report said.