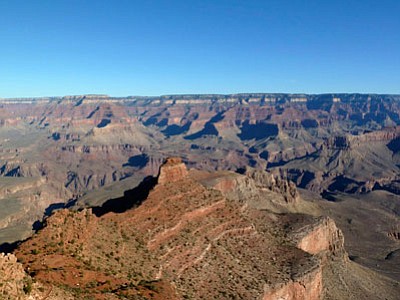 The appeal filed this week by the National Mining Institute and the Nuclear Energy Institute asks the 9th U.S. Circuit Court of Appeals to overrule U.S. District Court Judge David Campbell's decision dismissing their challenge to the 2012 ban.

Campbell ruled in favor of the federal government and conservationists in October, finding that former Interior Secretary Ken Salazar did not abuse his discretion or violate any laws in prohibiting new hard-rock mining claims.

Conservationists had argued that the ban would protect water flowing through the canyon from potential contamination.

Campbell said he could find no legal principle that prevents the Interior Department from withdrawing the lands without approval of Congress, even if he was erring on the side of caution in "protecting a national treasure."

The area is rich in high-grade uranium reserves and lies outside Grand Canyon National Park.

An American Indian tribe and five conservation groups plan to join the Obama administration in opposing the appeal.

"We'll work to defeat industry's appeal because it puts important and necessary protections at risk," Kevin Dahl of the National Parks Conservation Association said in a statement.

Attorneys for the mining groups confirmed they were appealing but did not comment further. Their notice of appeal did not give detailed reasons why the groups believe Campbell erred.

But the notice said they want the appeals court to take another look at look at whether Campbell was correct when he determined that Salazar's decision was not "arbitrary, capricious, an abuse of discretion or otherwise not in accordance with the law."

Mining is not completely off-limits under the ban. Anyone who had a claim staked before the ban went into effect and who can prove a sufficient quality and quantity of uranium could develop a mine.