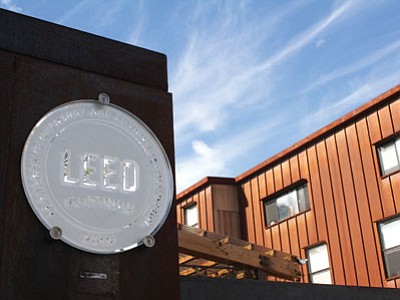 The project received the Energy Award, sponsored by APS, during a Design Awards gala in Scottsdale.

"The Village" student housing opened in June 2012 and within a year received LEED Platinum certification, the highest level awarded by the USGBC. This achievement places Prescott College with the first-ever LEED Platinum building in Yavapai County, and one of only about eight such higher education student housing facilities in the nation.

In 2014, a full year's monitoring of energy production and consumption data confirmed that The Village has exceeded design projections and is operating at "net zero" for electricity.

New president of Prescott College John Flicker, board member Richard Ach and architect Phil Weddle of the Scottsdale-based Weddle Gilmore Black Rock Studio were on hand to accept the award.

The family-owned Haley Construction Co. of Prescott also was recognized at the gala.