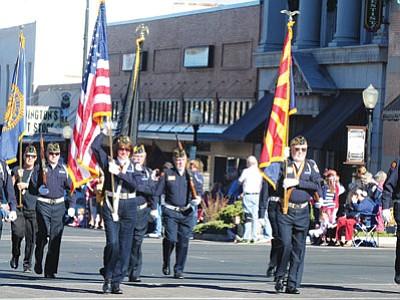 PRESCOTT - Two Vietnam War veterans and a 100-year-old World War II veteran will lead a parade of more than 80 entries through downtown Prescott on Tuesday.

The annual Veterans Day parade is set to start at 11 a.m. Nov. 11, and Prescott Special Events Manager Becky Karcie said it would be larger than ever.

Just in the past week, more than 20 new entries joined the 60 that had previously registered. The total of 80 exceeds last year's 74 entries, and nearly doubles the previous year's total of 48.

In 2013, the City of Prescott and the VA Medical Center collaborated to move the parade to downtown Prescott to make it accessible for more people.

In this second year in downtown Prescott, Karcie said the parade would honor all veterans but would place a special focus on those from the Vietnam War.

To that end, two Vietnam veterans - Bruce Bates and Richard Duncan - will serve as grand marshals, along with George Dworshak, a World War II veteran who will turn 100 on Veterans Day.

In addition, World War II Code Talker Dan Akee, who turns 94 on Veterans Day, will be designated the parade's "Super Server." Brigadier General William A. Hall, Land Component Commander of the Arizona Army National Guard, will also be on hand.

A special feature this year will be the 500 commemorative T-shirts that Tim's Auto Group will be handing out to parade-goers. Karcie said organizers hope people will wear the T-shirts that day, creating a "sea of shirts" along the parade route.

Special accommodations will be provided by the VA Medical Center for transportation and seating for veterans to and from the parade. Veterans can call Voluntary Service at 928-445-4860, extension 6013. The shuttle will pick up veterans at building 151 (the Domiciliary).