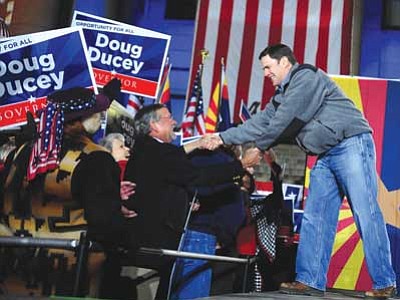 About 300 people showed up for the rally in relatively chilly temperatures hovering in the low 40s, with about three dozen carrying identical Ducey signs.

Still sporting a bronze tan, Sen. Jeff Flake couldn't help joking that the cold temperature made him want to go back to a tropical island. He and a Democratic senator from New Mexico stayed on a remote tropical island in August to film "Rival Survival" that aired on the Discovery Channel Oct. 29.

Sen. John McCain joked that he would have won his presidential bid if he looked like Flake, after thanking emcee and Secretary of State Ken Bennett for not mentioning that unsuccessful campaign.

Like Barry Goldwater before him, McCain launched his presidential run on the Yavapai County Courthouse steps. Bennett noted that Goldwater made his courthouse steps speech exactly 50 years and two months ago, then quoted from one of Goldwater's September 1964 speeches.

"Choose the way of this present administration and you will have chosen the way of the regimented society, with a number for every man, woman, and child, a pigeonhole for every problem, and a bureaucrat for every decision," Goldwater said.

The speakers on Monday night were still talking about Goldwater's ideals, said Bennett, who lost to Ducey in the gubernatorial primary.

Flake talked about going to Coldstone Creamery the other day to get ice cream, joking that Mormons have few legal vices. Ducey founded the ice cream store chain that calls its largest size cones the "Gotta Have It" size. Arizona has "gotta have Ducey," Flake said.

Ducey believes in a good education and he wants to get government out of the way of business, Brewer said.

"I am running to be governor of all people," Ducey said, adding that he wants to kick start the economy, restore K-12 to greatness and get out from under the thumb of the federal government.

"We can elect the right people or we can try to convince the wrong people to do the right thing," Congressman Trent Franks added. It's a lot easier to do the former, he said.

Both Franks and Gosar are relatively secure in their re-election bids this year. Andy Tobin, who is speaker of the Arizona House and a resident of Paulden, faces a tougher congressional race against incumbent Democrat Ann Kirkpatrick in her home district. He talked about reducing the federal deficit and closing the border to illegal immigrants.

Brewer and other speakers repeatedly urged supporters to go to the polls.

"Tomorrow's the big day and Arizona needs you to vote," Brewer said.